There's a lot of noise that comes with making daily moves in the market. Stocks go up and down, and sometimes that movement seems capricious. But if you pull back and look at long-term trends, you can find companies that offer the type of growth that can make you wealthy, given enough time and patience.

Three long-term trends that nearly everyone agrees on are cannabis sales will grow as more states legalize medical or recreational use, online commerce will continue to grow, and alternative energy is needed to reduce global warming. The trick is finding the right companies that will ride those trends, and I recommend Innovative Industrial Properties (NYSE:IIPR), Square (NYSE:SQ), and Brookfield Renewable Partners (NYSE:BEP). 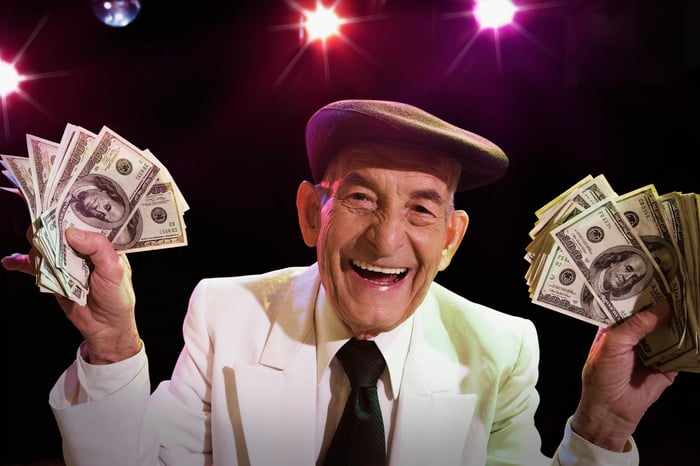 Innovative Industrial Properties is the first real estate investment trust (REIT) to specialize in leasing properties for cannabis companies. As such, the company has a niche that has allowed it to grow nearly unchecked.

As of Oct. 18, Innovative said it owned 76 properties leased to state-licensed cannabis operators with a total of 7.5 million rentable square feet of space (including 2.8 million square feet under development or redevelopment).

The business model is simple: The company buys properties from cannabis growers, then leases them back with safe triple-net leases under which the tenants pay all maintenance costs. With little access to traditional financing, marijuana companies find that selling their properties to Innovative is one of the better ways for them to raise cash. The company's portfolio includes leasebacks with Trulieve, Cresco Labs, Green Thumb Industries, and Curaleaf, among others.

The average length of the REIT's leases is 16.7 years, so it has a very steady income stream. In the second quarter, the company reported revenue through six months of $91.8 million, compared to $45.5 million in the same period in 2020. Adjusted funds from operations (AFFO) were reported as $3.11 per share through the first six months of 2021, up from $2.31 per share, year over year.

Over the past three years, the stock is up more than 550%, and its funds from operations (FFO) has jumped more than 1,250% over that period.

Innovative has offered a dividend since 2017 and has raised that dividend 900% over that period. It just raised it again in September by 7% to $1.50 a share, giving it a yield of 2.07% as of Tuesday's stock price.

Square stock has climbed 2,210% over the past five years with revenue climbing 935% during that time. The fintech company's ecosystem of services for merchants, and its Cash App are in the right position to grow along with e-commerce.

What I like about the company is that it continually updates its apps, giving it new products and more reasons for merchants to stay within its ecosystem. It also is just beginning to scratch the surface of what it can do internationally. It was already available in Great Britain, Canada, Japan, and Australia, and this year, it expanded its services to companies in Ireland, Spain, and France.

Through six months, the company reported $9.7 billion in revenue, up 195% year over year and net income of $243 million, up from a loss of $117.4 million in the same period last year. A quick look at the balance sheet shows the company made a smart bet on Bitcoin, earning a profit of $193 million from its investment through six months.

Square's move to buy more Bitcoin was considered risky, but it is a doubling down on the ability of Square's Cash App, which allows peer-to-peer Bitcoin transactions.

Brookfield Renewable Partners' stock has risen more than 135% over the past five years and increased revenue 38% over that period. The company, a wholly-owned subsidiary of Brookfield Asset Management, delivers renewable energy through hydroelectric, wind, and solar power in North America, South America, Asia, and Europe. That diversity of power and geography gives it the ability to capitalize on what is expected to be a broad push in public policy toward renewable energy and sustainability.

Renewable energy companies have not always been solid bets, but this one has been steady, and it offers a dividend with a yield of 3.16% as of Tuesday's stock price. If you combine the rise in the company's shares with its regular dividend, the total return for Brookfield Renewable is 203.3% over the past five years.

The company is looking to leverage the desire for more renewable energy. Earlier this year, it bought the 845-megawatt Shepherds Flat wind farm in Oregon, which the company is repowering with updated equipment. In the second-quarter earnings call, the company said it expects the investment will bring mid- to high-teen returns.

Riding the right trend to millions

With the right amount of investment and long-term patience, I believe in all three companies. I'm willing to bet that these three stocks are capable of returning 15% annually over the next three decades. That means, if you invest a total of $300 every month buying shares in these companies ($100 per company), at an average annual rate of return of 15%, you'll be a millionaire in a little over 25 years.

Of the three, I'm most excited about Square because it has capitalized on its early-mover status in fintech by constantly evolving. I'm also excited about Innovative Industrial Properties, though the one potential drawback would be if legislation such as the Safe Banking Act is adopted, thus opening up more-traditional financing to cannabis growers. Renewable Energy Partners is less of a sure thing than the other two, and its growth hasn't been as atmospheric, but of the three, it could be the best choice in the long run.