Activision Blizzard (ATVI 0.54%) creates and sells games played on personal computers, mobile devices, and gaming consoles. The company experienced a surge in new players and engagement at the pandemic onset. As the economy reopens, some are wondering if that surge will reverse.

The latest earnings report, released Tuesday, suggests the engagement is still there. But it also provided a different cause for concern. Let's look at the good and the potentially bad of what was reported. 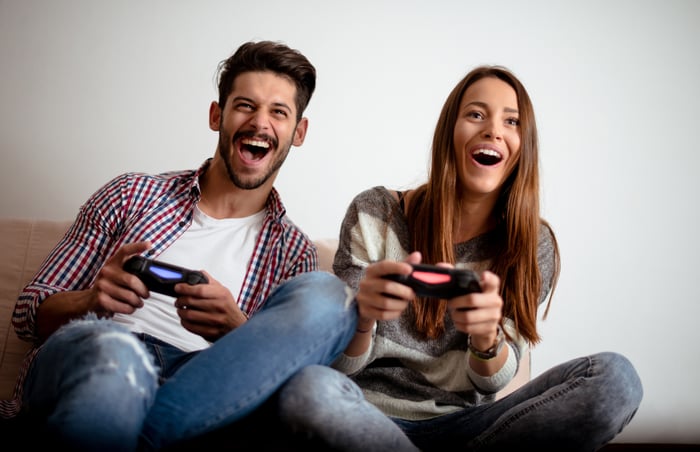 Gamers are maintaining engagement even as economy reopens

Over the past 18 months, folks cooped up at home for a lot longer than they would have liked looked for ways to make the time more enjoyable. The boost in Activision Blizzard's business at the pandemic onset was a little surprising, but actually made a lot of sense. Folks stuck at home needed something to occupy their time.

What is surprising now, however, is that revenue and engagement are staying high even as economies are reopening worldwide. It suggests Activision Blizzard may have proven itself to new gamers who are sticking around.

Overall, Activision Blizzard reported revenue of $2.07 billion in its fiscal third quarter, up from $1.95 billion in the same quarter last year. The year-over-year revenue growth is impressive considering world economies are in a profoundly less restrictive scenario than last year. It could be a reflection of continued concerns over the delta variant of the virus.

Or it could be that the company's mix of free-to-play games and premium content is resonating with gamers, whether stuck at home or not. Some of the strongest growth this quarter came from mobile games, which can be played anywhere.

Indeed, in the third quarter, the free-to-play mobile game Candy Crush saw net booking increase by 20% from last year and remained the top-grossing game franchise in the U.S. app stores. Hit titles like these keep players engaged regardless of stay-at-home restrictions.

Similarly, another one of its hit franchises, Call of Duty, delivered 40% year-over-year growth on mobile devices in Q3. The team at Activision keeps updating the game, adding features that gamers love.

The continued high level of engagement from players is a good sign for shareholders. The company has a pipeline of new games coming in the next few weeks and months to reinforce that connection with gamers.

However, the Blizzard division's ongoing issues with employee misconduct involving alleged discrimination and harassment have resulted in lawsuits and dozens of forced staff departures as well as voluntary departures from other staff. This has led to a delay in the planned launch of some titles until late next year. Specifically, the launch of two of the most highly anticipated games, Diablo 4 and Overwatch 2, are going to launch later than initially scheduled.

Activision Blizzard is taking steps to improve working conditions, and it remains to be seen if these new policies will keep talent at the company.

The employee exodus causing a delay in game releases looks like the primary focus of investors as the stock price plunged 14% after it announces earnings results. Game developers are highly skilled individuals who are difficult to find and retain. The risk is that the company will not be able to replace the departing talent. Moreover, if the exiting employee joins a competitor, they could help competitors make games that could potentially take Activision's customers away.

A bigger picture analysis from an investor's perspective suggests that Activision Blizzard's stock is not expensive right now as it is trading at a reasonable price-to-free-cash-flow ratio of 24, near its historical average of the last five years. If the price drop continues much further, investors may want to consider adding shares of this gaming company because its long-term outlook is strong.