Tesla reported $1.6 billion of net income in Q3 alone -- but this may be just the tip of the iceberg for the electric-car maker's profitability.

Tesla (TSLA 4.73%) shares have soared this year. Part of these gains have been driven by the company's surging sales during a year that has been particularly challenging for other automakers.

Perhaps an even more important driver for investors' growing bullishness has been the electric-car maker's fast-growing bottom line. In Q3 alone, Tesla raked in $1.6 billion in net income, up from just $331 million in the year-ago quarter.

But this may just be the start for Tesla's bottom line. After all, the company has achieved this net income during a challenging operating environment. Imagine how the automaker's profits could fare when global supply and labor shortages improve. 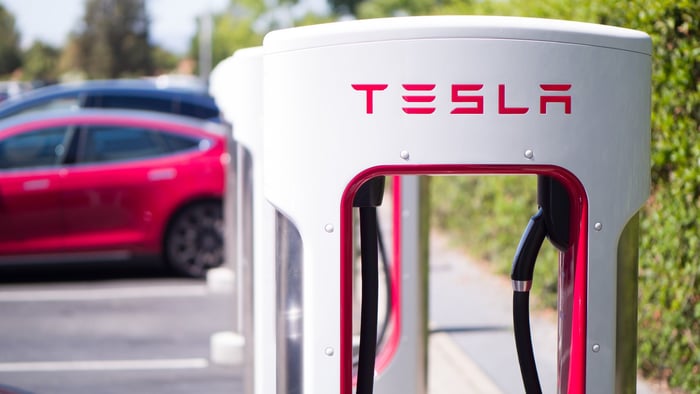 It would be difficult to overstate the momentum Tesla is seeing in profitability. The company's automotive gross profit margin has expanded every quarter this year, with the key metric coming in at an impressive 30.5% year over year in Q3 2021. Further, Tesla's third-quarter non-GAAP (adjusted) earnings per share increased 139% year over year to about $2.1 billion. This outsize growth relative to Tesla's 57% revenue increase during this period highlights how the company's scalable business model is benefiting from operating leverage.

Improvement in profitability, Tesla said in its third-quarter shareholder letter, was primarily due to vehicle unit sales growth and cost reductions. But what's more notable is that this growth was achieved despite a number of headwinds to profitability: lower average selling prices for its vehicles, growth in operating expenses, lower revenue from sales of zero-emission vehicle credits, incremental supply-chain costs, and a $51 million impairment charge related to its Bitcoin investment.

There are a number of reasons Tesla's earnings momentum will likely continue in 2022.

First, the automaker's increasing production rates, new factories, and rising demand should lead to significantly higher sales next year -- likely to the tune of around 50% year-over-year growth. Second, any normalization of the current challenging supply-chain environment could lead to greater production efficiencies and lowered part and logistics costs. Finally, returned sales volume from Model S and X vehicles following their slowed production volume in 2021 as the models were refreshed could help Tesla's gross profit margin. (The Model S and X are pricier than Tesla's higher-volume Model 3 and Model Y vehicles and should command a greater gross profit margin).

But there are also many other small reasons Tesla's profit margins could swell next year, bolstering profitability. To name a few:

Of course, another simple reason to expect rapid growth in profits is that Tesla management is optimistic about the company's bottom-line potential. "We expect our operating margin will continue to grow over time, continuing to reach industry-leading levels with capacity expansion and localization plans underway," the company said in Tesla's third-quarter shareholder letter.

On average, analysts expect Tesla's earnings per share to grow at an average annualized rate of more than 70% over the next five years.