The price for this fast-growing e-commerce stock is down more than a third from recent highs.

Share prices of CarParts.com (PRTS -2.90%) were taking a dive after the third-quarter earnings report came in.

The small-cap stock closed down 7.1% after it posted its slowest revenue growth since the pandemic started. The top line still grew by a healthy 21% to $141.8 million, which outpaced the average analyst estimate at $133.8 million, but the days of scorching growth during the pandemic seem to have ended. Adjusted earnings before interest, taxes, depreciation, and amortization (EBITDA) also fell from $5.1 million to $2.3 million due to higher costs associated with the supply crunch. 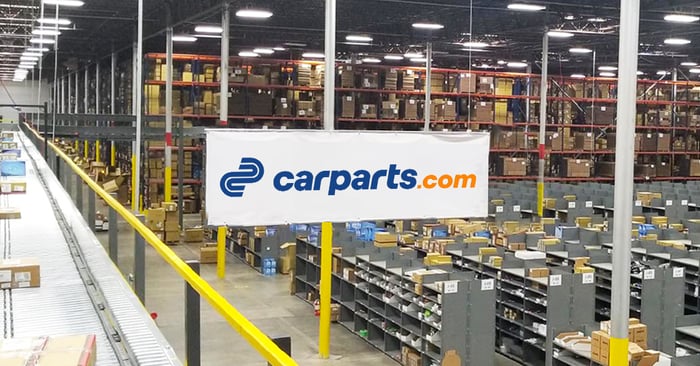 With Wednesday's stock price decline, CarParts.com is now down 36% from its all-time high in February. Is the pullback a buying opportunity or is slowing revenue growth a reason to stay away? Let's take a look at a few key facts that investors should be aware of before we answer that question.

The industry is facing headwinds

The auto parts industry is lapping a boom year. Spending on auto parts jumped during the pandemic, thanks to stimulus checks and interest from hobbyists who had extra time on their hands and an opportunity to make improvements and repairs to their cars. During a time when many activities were off-limits, improving your vehicle, much like improving your home, proved to be popular.

However, the auto parts market is normalizing from that surge, and at the same time, the industry is facing supply chain constraints like much of the business world, which is causing delays and adding to costs.

CarParts.com controls its supply chain, unlike some of its online-only competitors, which use dropshipping, and that's given the company an advantage. However, it's still facing higher shipping costs as well as limited container capacity, and wages are still up because of the labor shortage.

One of CarParts.com's primary goals is to ensure that it has adequate inventory. It was able to grow its inventory line to $131.8 million, up from $114 million at the start of the quarter, putting it in a strong position for the fourth quarter and early next year.

In an interview with The Motley Fool, CarParts.com CEO Lev Peker reiterated that the company still has more demand than it can handle. The company has taken steps, including extending shipping times, to balance demand with its own ability to fulfill its orders.

Excess demand is a good problem to have, and CarParts.com has more capacity coming on line soon, including the expansion of its new Texas distribution center and the addition of a distribution center in Florida that is expected to be accretive by the second quarter.

With the Florida addition, CarParts.com will be able to achieve one-day delivery to 55% of the U.S. and two-day delivery to 98% of the country. There's a flywheel effect with delivery speeds and sufficient inventory, as having the right part in stock and being able to deliver it quickly aids customer conversion and drives growth. Peker noted that there's a direct lift from nearby customers when the company opens a new distribution center since it allows overnight shipping to customers in the region.

CarParts.com continues to target 20% to 25% revenue growth over the long term and 8% to 10% adjusted EBITDA margins. While revenue growth may occasionally come in below that target, the company looks well-positioned to grow around that rate as it opens new distribution centers, benefits from the current excess level of demand, expands further into mechanical parts, and takes advantage of the broader tailwinds in e-commerce.

Peker said that the company has its sights set on a $300 billion addressable market of which e-commerce has still penetrated less than 10%, so there is still a long runway of growth ahead of it.

Based on its last four quarters of revenue, CarParts.com now trades at a price-to-sales ratio of 1.4, which is less than direct-selling e-commerce peers like Chewy and Wayfair, and its prospects still look promising.

While the high double-digit percentage growth rates we saw in recent quarters may have come to an end, the company still looks primed to steadily grab market share in the auto parts industry, and profits should follow. The current sell-off is worth taking advantage of.

Why CarParts.com Stock Rose 16% in December

Why CarParts.com Stock Jumped 16% in November

This Growth Stock Is Accelerating Into a Potential Recession. Time to Buy?

1 E-Commerce Stock That Isn't Slowing Down
413%