The struggling office lease company is getting back on its feet.

Once a flashy media darling, office-sharing company WeWork (WE -7.21%) quickly faded into the background after a failed 2019 initial public offering (IPO) and the departure of its charismatic co-founder and Chief Executive Officer Adam Neumann. It reemerged into the limelight two weeks ago when it finally debuted on the stock market when it was bought by a special purpose acquisition company (SPAC) at a valuation of $9 billion. That was less than a quarter of the $47 billion valuation it was pegged at before it floundered. Does that mean you should put it on your shopping list now? 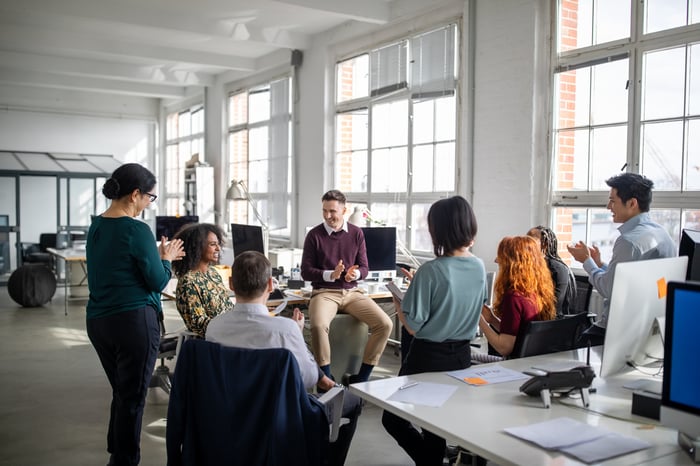 WeWork has a compelling business model. It owns or leases commercial space and rents out desks, full offices, or larger office space to freelancers, small businesses, or even big businesses that need space in cities where they lack existing facilities. People who work from home often find their productivity boosted when they rent a desk, making the cost worthwhile for freelancers. And it's a great fit for small businesses, which might need rooms for meetings and other services, but not much more.

The company has 762 locations worldwide with almost a million desks, and as of October, more than a half-million memberships. Members include Fortune 100 companies such as Citigroup and Johnson & Johnson. It offers several membership options, such as pay-as-you-go, dedicated space, and all-access, which allows a team to book various locations as needed.

This is an exciting business with many avenues of growth. Opportunities abound in the post-COVID-19 world, as businesses embrace new ways of operating that include remote work and global teams. But for WeWork, the road to today has been strewn with challenges.

More than a vision

WeWork filed for an IPO in 2019, but then it was revealed that the company was losing lots of money, and Neumann was reportedly leasing his own privately owned real estate back to the company. The IPO imploded, Neumann left, and Japanese venture backer Softbank bailed out the company from going under. Softbank remains a majority stakeholder after the SPAC deal, which gave WeWork $1.3 billion in cash before expenses.

The problems caused by the failed IPO were made worse during pandemic, when businesses closed and offices shut their doors. Memberships tumbled from 525,000 in 2019 to 395,000 in 2020 and revenue plunged.

Since then, WeWork has been clawing its way back under the leadership of new CEO Sandeep Mathrani, who has sold property, cut jobs, and slashed $1.9 billion  in costs. Revenue growth has been incremental, rising in each of the past five months. Third-quarter revenue of $658 million was 10% more than in the second quarter, and occupancy increased to 60% from 52% in the prior quarter. .

Muthrani overhauled what he called an "upside down cost structure," where the company was paying more for the space than it was getting for leases. As a result, Muthrani said he expects the company to be profitable next year. That would be a dramatic recovery, considering WeWork had a net loss of $2 billion in the first quarter of 2021, and almost $1 billion in the second quarter.

The company expects memberships to rebound to 591,000 this year and to reach nearly a million by 2024. It also predicted that revenue will climb to $6.7 billion by then, or double the 2020 number.

The company says that renting WeWork space can save a business 57% to 66% over leasing and building out its own space. Meanwhile, it's developing products, such as the newer all-access membership, which provides flexible options for the modern working environment.

The company sees itself in the early innings of a dramatic shift to working in flexible spaces, and it says it's poised to take advantage of this trend   in the coming years.

In the meantime, though, it will pay a lot of money on long-term leases while waiting for short-term cash infusions from tenants to cover its high fixed costs. If new paying members don't come in fast enough, though, it will continue to to bleed cash. That's not a formula for remaining solvent forever.

A risky stock, but one to consider

WeWork stock is slightly down from its SPAC debut price of $10, and its market cap has fallen to a little more than $7 billion as of this writing. Investors aren't very confident right now about the company's prospects. It's still cleaning up its operations and looking for new tenants. Although management offers an optimistic outlook, investing in the company is risky. At the current price, shares are trading at a fairly low valuation of 2.5 times sales.

However, if things do go according to plan, there could be big gains, and investors with a high tolerance for risk might want to consider taking a small position at the current low price.

Citigroup is an advertising partner of The Ascent, a Motley Fool company. Jennifer Saibil has no position in any of the stocks mentioned. The Motley Fool recommends Johnson & Johnson and Softbank Group. The Motley Fool has a disclosure policy.

Why WeWork Stock Plunged 48% in December

Why WeWork Stock Lost 14% of Its Value in February

Why Shares of WeWork Are Up Today
413%