Please ensure Javascript is enabled for purposes of website accessibility
Log In Help Join The Motley Fool
Free Article
Join Nearly 1 Million Premium Members And Get More In-Depth Stock Guidance and Research
By Will Healy – Nov 5, 2021 at 10:15AM

GrowGeneration (GRWG) is not yet a household name. The company currently operates 63 hydroponics stores in 13 states between California and Maine.

Despite a relatively small number of stores, these locations, along with its e-commerce operations, make it the leading retailer of hydroponics supplies. As the cannabis industry that it supports expands, it can grow along with that emerging industry as well as drive investor returns, regardless of the state of the economy. 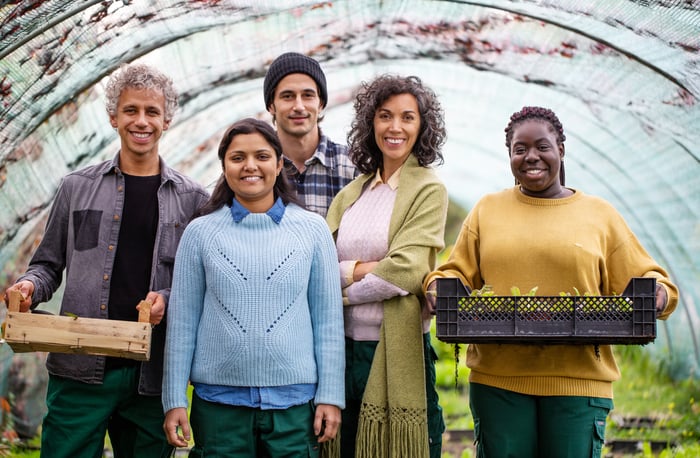 For those worried about a downturn, consider that cannabis products are generally used for either medical or recreational reasons -- and both of these industries tend to thrive regardless of the state of the economy. Moreover, Markets and Markets, a market research company, found that farmers also employed hydroponics to grow vegetables indoors. This is another recession-resistant business that can benefit from hydroponics supplies.

To that end, Markets and Markets forecasts a compound annual growth rate of 11% for the hydroponics market through 2026. This would take the global market from just under $10 billion in 2020 to almost $18 billion by 2026.

Since the company forecasts 2021 revenue at between $455 million and $475 million, it could experience considerable growth, especially since farmers and recreational growers of cannabis and other crops will need the hydroponics supplies GrowGeneration provides.

Additionally, its products are available online and it continues to expand its physical footprint rapidly. GrowGeneration has set a goal to grow to 100 stores by 2023 and eventually operate in every U.S. state. As the largest company in its industry, economies of scale could work in GrowGeneration's favor as it can offer a wider selection at a lower price.

Despite those increases, one might question how GrowGeneration can compete with companies like Home Depot or Tractor Supply, which also sell hydroponics supplies and operate comparable-sized stores.

This also leaves GrowGeneration better suited to provide private label products. To this end, the company acquired Canopy Crop Management and Char Coir, two enterprises that produce agricultural products for this industry. Such offerings not only give customers a reason to consider GrowGeneration but could allow the company to standardize products in this still disparate industry.

During the first half of 2021, revenue surged to $216 million, a 183% increase compared with the same period in 2020. This led to more than $17 million in net income in the first six months of the year, a massive increase from the $636,000 reported during the same timeframe in 2020. Earnings surged as operating expenses grew at a somewhat slower pace of 121%.

Despite the massive growth, investors had even higher expectations and have taken the retail stock down by close to 70% since the February high. 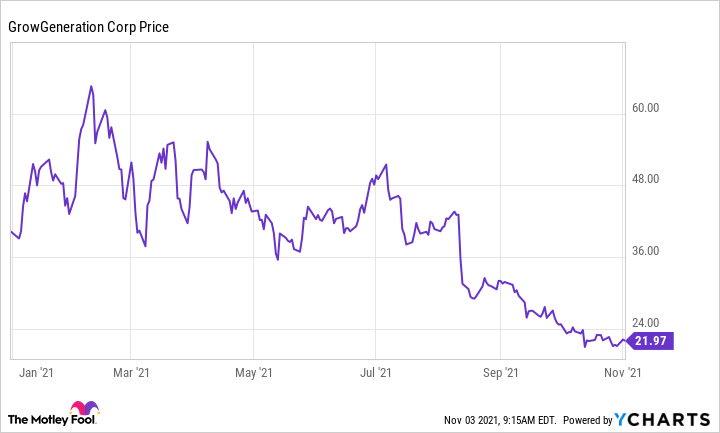 At this price, the stock trades at a P/E ratio of approximately 75. Admittedly, that comes in higher than its peers -- Home Depot's earnings multiple is 26, and Tractor Supply's is 28.

Nonetheless, those two companies post comparable store sales increases in the single digits, well under the 60% increase posted by GrowGeneration in Q2. This means the hydroponics retailer will likely experience substantially higher growth levels than either of its peers, making up for the disparity in P/E ratios.

Due to its support of a burgeoning cannabis industry and an increased dependence on hydroponics to grow food crops, GrowGeneration stock should drive growth regardless of the overall economy. While its addressable market may seem modest, GrowGeneration's revenue growth points to more dominance in the high-growth market it seeks to standardize.

Between this growth and the substantial discount where the stock trades today, GrowGeneration could be a top growth stock to buy for the foreseeable future.

3 Reasons to Consider GrowGeneration Amid a Mixed Earnings Report
420%