Simply put, S&P Global is a brilliant generator and distributor of cash.

One of the biggest names in the financial exchange and data industry, S&P Global (SPGI 0.27%), has seen its stock price rise by nearly 1,000% over the last decade. Operating in four segments (ratings, market intelligence, Platts, and indices), the company is much more than just the S&P 500 index for which it is famous.

Today we will look at the key metrics leading to S&P Global's success and highlight five critical charts that show why the company makes an excellent foundational piece for any portfolio. 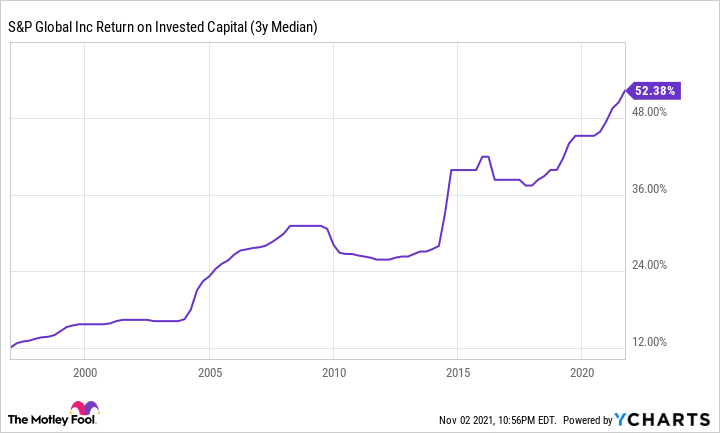 Leading off S&P Global's chart-stravaganza is its beautiful return on invested capital (ROIC) of 52%. Not only is this mark highly impressive, but it has also steadily grown from 12% since the end of the last century, highlighting the enduring efficiency throughout the company's operations.

ROIC determines how well a company creates or destroys value from the debt and equity used to fund its operations. Generally speaking, an ROIC above 10% is exceptional, and a continually improving one tends to indicate future outperformance for the stock compared to the broader market.

S&P Global's ROIC progression from 12% to above 50% over the last two decades signals that it is not only an efficient allocator of capital but one of the best in the market (and still improving). 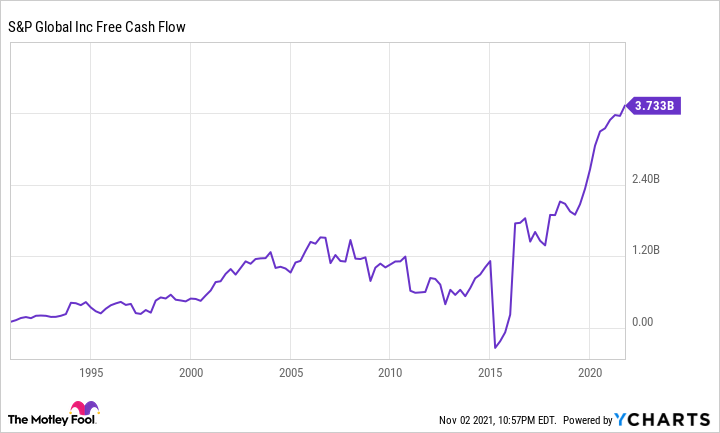 Thanks to this efficient use of capital, S&P generates vast quantities of free cash flow (FCF), as the chart above details. Moreover, aside from litigation settlement fees the company had to pay in 2015, its FCF production has never wavered and has only accelerated over the last five years.

Boasting a profit margin of 35% and a free cash flow margin of 46%, S&P not only creates immense profitability but generates cash from its sales at an even higher rate.

With a market capitalization, or company price tag, of $110 billion, S&P trades with a price-to-free cash flow (P/FCF) ratio of 30. While this is higher than the S&P 500's average P/FCF of 18, the company's historical track record and recent FCF growth warrant a premium valuation. 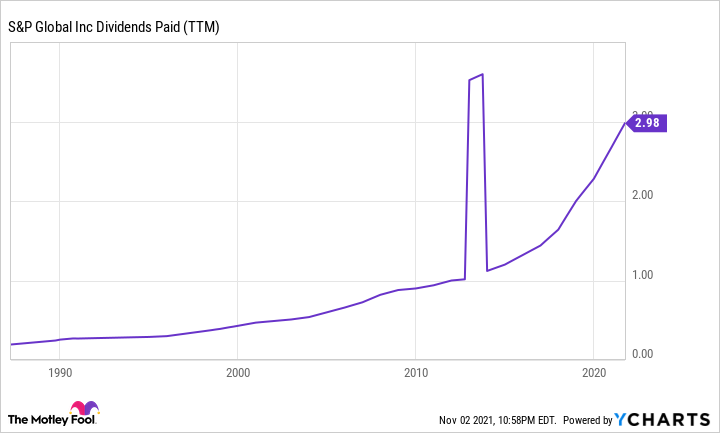 With this ample cash generation, S&P has handsomely rewarded shareholders, raising its dividend payout annually for the last 48 years. While its dividend may only yield 0.7% currently, it is worth noting that you would now receive 2.5% on that original cost if you bought shares five years ago.

This compounding is the simple beauty of buy and hold, dividend growth investing. 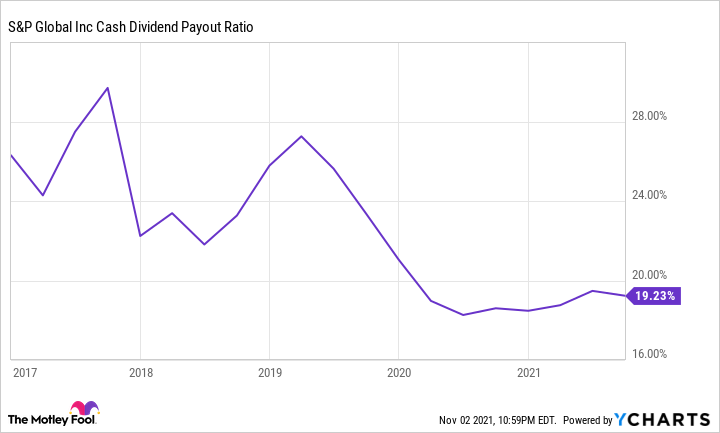 However, this continued compounding is only possible for S&P because its operations can easily maintain funding for dividend growth. Despite its long-standing history of dividend increases, it still only has a cash dividend payout ratio of 19%, a figure that hasn't been above 30% in the past five years.

This simple metric quickly shows that thanks to S&P's strong cash generation, it should be able to increase its dividends far into the future. 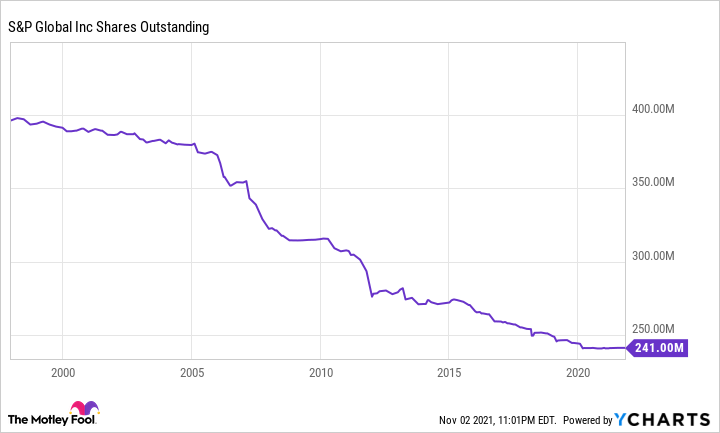 With a cash dividend payout ratio below 20%, the company often has the fortunate problem of having excess cash on hand. Historically, even after using a portion of this cash to fund new growth within the company, it has repurchased shares in a consistent and compelling manner.

Since 2011, S&P's shares outstanding have dropped by 20%, which continues to juice earnings per share figures and boost its overall returns to shareholders.

A cornerstone stock for any portfolio

All in all, the longer you hold S&P Global, the more it will make sense; let compounding perform its magic.

While the stock trades at a slight premium to its S&P 500 peers on a P/FCF basis, it ultimately deserves this valuation as one of the best generators and distributors of cash in the stock market.