Most likely in the doldrums, but it could be temporary.

Over the last three years, Ocugen's (OCGN 5.83%) stock has lost 60% of its value, frustrating the small biotech's early investors. But if its gains of more than 4,700% in the last 12 months are to be believed, the market is quite enthusiastic about the company's potential. This is likely thanks to its externally developed coronavirus vaccine, which might be approved for sale sometime next year.

Will its vaccine lift it to new heights by the end of 2024, or is Ocugen's time in the limelight approaching an end now that its competitors are so far ahead? 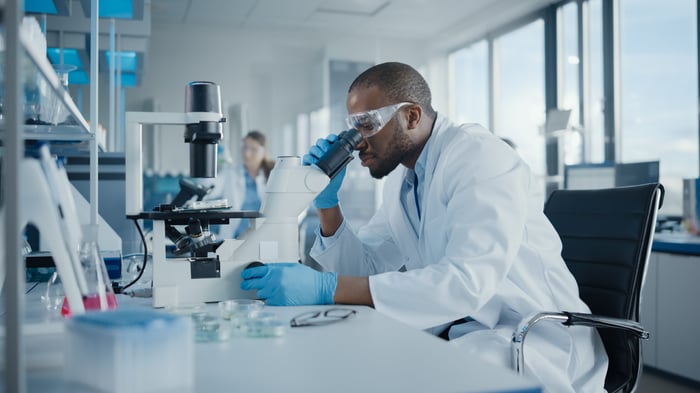 Expect revenue to grow with a bang

Investors should expect Ocugen to start reporting significant sums of revenue for the first time over the next three years. That might well translate into reporting a profit for the first time, too. Crucially, having revenue and earnings will shed some light on the stock's valuation, which is difficult to ascertain in their absence.

All of that revenue will come from its coronavirus vaccine, which it's currently trying to get approved to start phase 3 clinical trials in the U.S. The jab is licensed from Bharat Biotech, an India-based biopharma that originally developed it from inactivated SARS-CoV-2 viral particles. Per the license, Ocugen can only sell it in Canada and the U.S., though the World Health Organization approved it for global emergency use on Nov. 3.

The vaccine, called Covaxin, is already approved in India, which means that its chances of scoring approval in the U.S. and Canada are quite high. Covaxin has an overall efficacy of 77.8% and is 93.4% protective against severe disease, so it could be competitive with products from Pfizer or Moderna and even superior to Johnson & Johnson's vaccine. All of this means that Ocugen should be able to find a niche in the market. But before that, it'll need to finish phase 3 clinical trials for Covaxin, which management estimates could happen in the first half of next year.

Progress in its pipeline might lead the way to the future

Assuming that Ocugen's coronavirus vaccine is both approved and successfully delivers new revenue growth, management's next order of business will be to build out the projects that are currently in its pipeline.

All of its programs are in the pre-clinical stage of development, and that'll need to change over the next three years if the company is going to flourish in the long term. In particular, its gene therapy candidate to treat dry age-related macular degeneration could be lucrative, as there aren't any existing medicines for it. The same is true for its mutation-associated retinal degeneration program. These therapies aim to treat chronic eye conditions. Expect the market to react more favorably if these projects advance through early-stage clinical trials. If everything goes according to plan, they might be commercialized by 2026.

Still, in the next few years, the elephant in the room will continue to be that its gene therapy platform for retinal cells is unproven in humans. While there's no evidence to suggest that it's safe or unsafe, gathering any evidence in human subjects will be a high-stakes endeavor. Early proof of the platform's safety and efficacy will give investors a little bit more confidence that Ocugen has something of value, even if individual therapy programs don't pan out. The ultimate proof of the platform's usefulness would be in the form of commercialized gene therapy, but that's more than a few years out.

There's also the likely prospect that management will want to expand the company's pipeline with the help of acquisitions, financed by vaccine revenue. That might entail buying more licenses to near-ready assets as it did with its coronavirus vaccine. Alternatively, there might be a spate of new internally developed programs hitting the pipeline if the company decides to build up its research and development capabilities.

What will happen if vaccine sales start to drop?

As the coronavirus becomes an endemic illness, it's possible that the global supply of vaccines will surpass demand, causing sales to fall. We're not there yet, but by 2024, we might be. That could end up being a problem for Ocugen, as it probably won't have any other sources of revenue to make up for falling vaccine sales by then. Plus, the business will be particularly vulnerable to ebbing demand, as its license only permits it to sell Covaxin in the U.S. and Canada, where the market is already crowded and the existing levels of vaccination are high.

Therefore, in three years it's possible that the company will be in an awkward spot where investors are dissatisfied with declining revenue and too impatient to wait for the currently nascent pipeline programs to mature. In a happier scenario, Ocugen's projects are advancing swimmingly, and investors are excited about its new therapies approaching the later stages of their clinical trials.

Either way, don't be too surprised if the company's position looks uncertain in a few years. Getting its vaccine to the market in North America is only the first mountain that it needs to climb to success, and it'll need to keep reinventing itself to deliver for investors.