The software company got a big upgrade from a Wall Street analyst.

Shares of software outfit BTRS Holdings (BTRS) -- better known as Billtrust -- were up by 13% as of 11:59 a.m. EST Monday. Its shares have been steadily on the decline since the SPAC merger that brought the company public in January. However, an analyst at JPMorgan Chase (JPM -0.26%) recently rated the stock a buy and put a price target of $15 on it -- implying some 60% upside from where it's trading now. 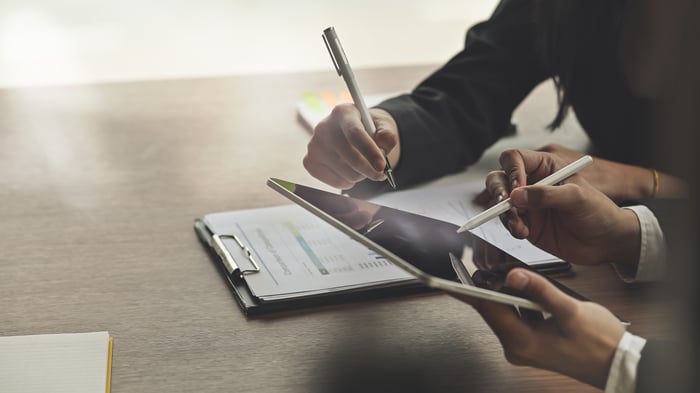 Billtrust provides cloud-based software for billing and payments, helping its customers save time and money compared to traditional invoicing and check-acceptance methods. The company reported 27% year-over-year revenue growth in its software and payments business in Q2 2021 to $24.6 million. But with a market cap of upwards of $2.5 billion earlier this year, expectations were high for Billtrust.

To boost its long-term prospects, last month, it acquired Belgium-based business-to-business digital payments specialist iController for $58 million. That will give Billtrust a larger presence in Europe, and help support its efforts to expand its gross profits by a percentage in the high 10% to low 20% range in the coming year.

Billtrust will deliver its third-quarter report on Wednesday. Management previously said to expect net revenue of $128 million at the midpoint of guidance for full-year 2021, which represents an 18% increase over 2020. Adjusted gross profit margin should be in the 70% to 71% range, although adjusted EBITDA (earnings before interest, tax, depreciation, and amortization) will likely be a loss of between $14 million and $16 million.

Currently, Billtrust stock trades for just under 12 times expected 2021 sales, giving it a market cap of $1.5 billion. At that level, it's not exactly a cheap software stock. However, if it can continue growing at a double-digit percentage pace and make further progress toward profitability, it could be a long-term value in the greater digital payments and software-based bill management space.

JPMorgan Chase is an advertising partner of The Ascent, a Motley Fool company. Nicholas Rossolillo and his clients have no position in any of the stocks mentioned. The Motley Fool owns shares of and recommends BTRS Holdings Inc. The Motley Fool has a disclosure policy.

Why Shares of BTRS Holdings Were Falling Today
415%