Please ensure Javascript is enabled for purposes of website accessibility
Log In Help Join The Motley Fool
Free Article
Join Nearly 1 Million Premium Members And Get More In-Depth Stock Guidance and Research
By Will Ebiefung – Nov 9, 2021 at 9:15AM

This dog-themed cryptocurrency is falling like a rock. Here's why the pain may be just beginning.

Shiba Inu (SHIB 0.37%) investors are reeling as the high-flying token reverses many of its October gains. The crypto market is notoriously volatile and hard to predict. But Shiba Inu has weak fundamentals, and this may be the beginning of a bear market for the asset.

Let's explore two reasons why Shiba Inu's crash could be just getting started.

Shiba Inu prices are now down around 30% from an all-time high of $0.000088 reached late October. The correction comes amid fears that those with large holdings (dubbed whales) will take profits. This is a major threat because Shiba Inu depends on the greater fool theory, which suggests most people buy it to sell it to others for more in the future. If the whales start offloading, a sharp dip could break the greater fool assumption for new investors, leading to a chain reaction of selling. 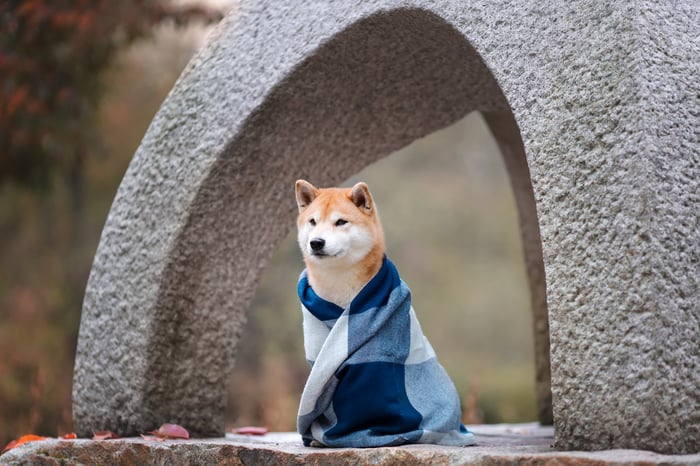 On Nov. 1, a major Shiba Inu whale moved $2.78 billion worth of tokens out of their wallet to different accounts. It is believed that this unknown investor initially purchased 70 trillion coins for $8,000 back in August 2020 and might finally be ready to book some well-deserved profits.

It gets worse. According to data from coinmarketcap.com, just 10 investors control a jaw-dropping 66% of the total Shiba Inu supply, compared to just 5% for the top 10 Bitcoin whales. The high concentration of ownership makes Shiba Inu risky because these people can easily move the price. And if they decide it's time to move on, other investors will be left holding the bag.

At the time of writing, 511,000 people have signed a change.org petition requesting Robinhood Markets add support for Shiba Inu. This follows successful appeals to Binance and Coinbase, the latter of which enabled Shiba trading for its New York residents on Nov. 5.

But unfortunately, these moves were too little too late.

Shiba Inu has already soared 60,000,000% since its inception, despite questionable fundamentals. And retail investors who buy the token now could be coming in near the top -- just in time to hold the bag as earlier investors cash out. Further, the growing mainstream support will make it easier for whales to sell their Shiba Inu for fiat currency instead of other tokens, making it significantly easier for them to book real-world profits.

The growing mainstream attention could also increase Shiba's volatility. According to data from Coinbase, the token's typical holding time is just 11 days on the platform -- a far cry from Bitcoin and Ethereum, which boast holding times of 76 days and 77 days, respectively. The data suggests most new buyers are looking for a quick flip instead of a long-term investment.

Why is Shiba so risky?

Shiba Inu is risky because of its poor fundamentals. The token was designed to piggyback on the popularity of meme coins like Dogecoin and the hype generated when Tesla's CEO Elon Musk adopted a Shiba Inu breed puppy in October. But Shiba doesn't introduce any innovative new use of blockchain technology and is far too volatile to function well as a store of value or medium of exchange. Investors should try not to be the ones holding the bag when the music stops.