It isn't even close.

As two of the world's largest pharmaceutical companies, Pfizer (PFE 0.90%) and Merck (MRK 0.91%) are fierce and heavyweight competitors in the market for coronavirus medicines. While both are firmly profitable, neither company has outperformed the market over the last decade, nor in the past three years.

But, with the considerable hype and massive new revenue generated by their coronavirus projects, that could change. Let's evaluate the prospects of each of these competitors. 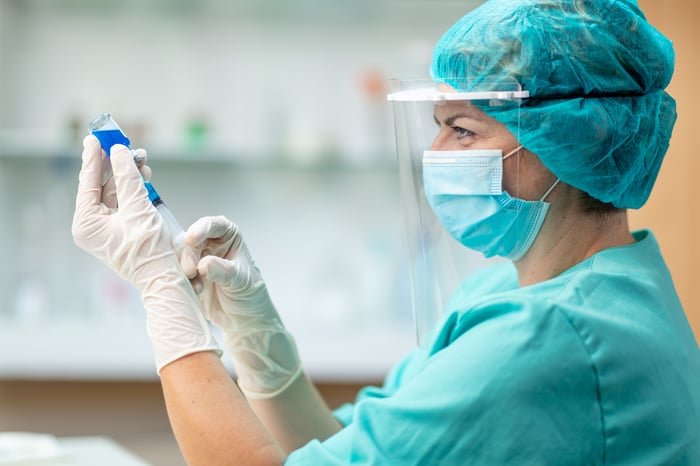 The (very strong) case for Pfizer

In case it isn't obvious, Pfizer's appeal as a coronavirus stock is that it's the maker of the highly successful vaccine called Comirnaty. In the second quarter of this year, sales of the jab accounted for $7.8 billion, making it worth more than any of the other medicines in its roster. In the third quarter, it sold even more, bringing in $13 billion. Vaccine sales are a significant driver of its Q3 performance of 130% year-over-year growth in quarterly revenue, to say the least.

Since Comirnaty was granted Emergency Use Authorization (EUA) for use as a booster shot to shore up immunity for older adults and vulnerable populations on Sept. 22, projections for vaccine revenue have risen accordingly. Next year, Pfizer plans to produce a total of 4 billion doses, a substantial scaling up from the target of 3 billion doses planned for 2021. That 3 billion doses goal is also a scale-up from the 1.3 billion doses that were originally scheduled for this year. In other words, demand for jabs is still skyrocketing, even with a handful of different manufacturers in the market.

As a result, in Q2 management raised its revenue guidance for 2021 to be between $78 and $80 billion, $33.5 billion of which will be from Comirnaty. Then, a mere three months later after issuing the guidance in Q2, it raised the total revenue estimate again, this time with a new upper target of $82 billion, with Comirnaty accounting for $36 billion. In short, the company is making money so quickly that its projections are quickly out of date.

As though that weren't enough, Pfizer is also working on an antiviral pill called Paxlovid that treats COVID-19. Paxlovid was in phase 2/3 trials, at least until an interim data analysis found that it was at least 89% effective at preventing serious illness or death in a population of at-risk people on Nov. 5. With results as strong as those, the trial was halted early so that Pfizer could apply for an EUA immediately. That means the pill could start selling before the end of the year.

Merck is likely to lag behind

Unlike Pfizer, Merck doesn't have a coronavirus vaccine candidate, so its present revenue from the market is zero. But, Merck's new antiviral for COVID-19 called molnupiravir could threaten the sales of other companies that are making therapies for the disease, like Gilead Sciences and Regeneron.

In its recently completed phase 3 clinical trials, molnupiravir was shown to cut the risk of hospitalization or death by around half in people with mild to moderate cases of COVID-19. On Oct. 11, Merck submitted a petition for an Emergency Use Authorization to the Food and Drug Administration. That puts its pill slightly ahead of Pfizer's when it comes to regulatory filings, even though it may not be as effective for patients.

Still, it's unlikely that its antiviral pill will erode the market share of vaccines, including the one made by Pfizer. Once approved, the drug could make as much as $7.8 billion per year globally, which isn't half bad when compared to Merck's trailing revenue of $52.6 billion. Through 2030, Bernstein analyst Ronny Gal predicts that Merck will bring in $22 billion from sales of the drug, assuming it's approved. But, that projection was made well before Pfizer's Paxlovid came on the scene and appeared to be significantly more effective than molnupiravir, so the actual total revenue will likely be much less than the estimate. 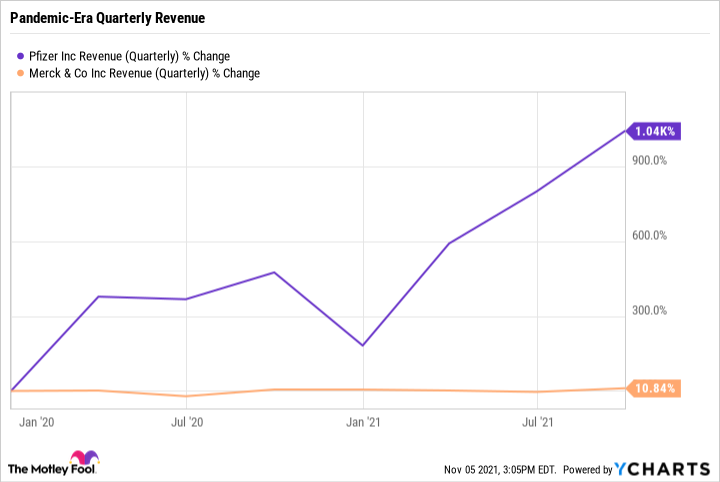 All the signs point in one direction

In my view, on the basis of their coronavirus projects alone, there isn't much of a contest, because Pfizer wins by a mile. Its expected $36 billion this year from sales of its vaccine completely eclipse the analyst's estimation of Merck's total revenue from its antiviral over the next eight years.

In addition, Pfizer's antiviral pill will strongly contest some of Merck's market share, as its efficacy in preventing severe disease appears to be significantly higher based on clinical trial data.

More importantly, ongoing sales of Comirnaty will also make a much bigger impact on Pfizer's top line than Merck's antiviral will for it. So, Pfizer will likely be the faster-growing company on the basis of its coronavirus revenue in addition to having a larger, more effective pipeline of related projects.