AMC unveiled a surprisingly positive earnings report, but its share price decline on Tuesday wasn't surprising at all.

Sometimes stocks can go up after bad news and go down on good news. Case in point: AMC Entertainment (AMC -9.12%) the movie theater chain-turned-meme stock that has captured the attention of retail investors.

Looking over the company's Nov. 8 third-quarter earnings release and transcript, there was actually quite a bit of good news for the company. Yet AMC's stock swooned 11.4% the following trading day.

With the stock up a whopping 1,800% on the year, it's an understatement to say expectations were high. As the theater chain rebounds from the pandemic, even better-than-expected news and commentary probably won't be enough to justify its nosebleed share price. 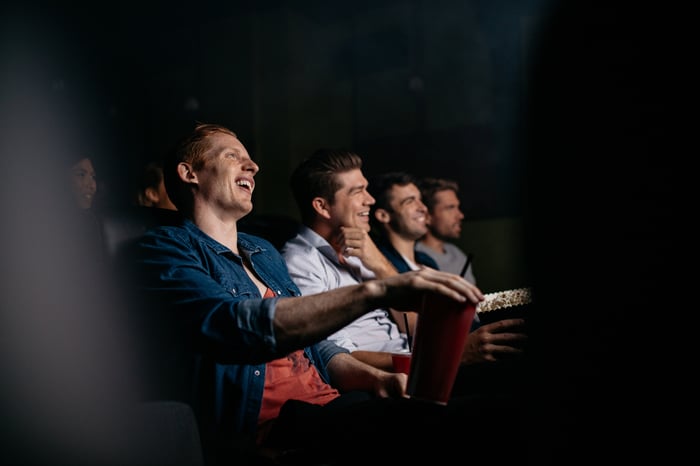 Kudos to management and moviegoers on a solid rebound

On the positive side, AMC's third-quarter revenue and earnings figures came in ahead of analyst expectations. Revenue was $763.2 million, up nearly 540% over the pandemic-stricken quarter last year, while the company's net loss of $0.44 per share was also better than expected. The third quarter marked the first time AMC's theaters were completely open for business since the start of the pandemic, but of course a narrow film slate and the rise of the delta variant probably affected the recovery.

Assessing results relative to pre-pandemic times, attendance was just 46% of Q3 2019, but that was a 100% improvement over the second quarter, which saw attendance at 23% of Q2 2019 figures. So things were on the right path.

Commentary on the current quarter was even more positive: Several blockbusters withheld during the pandemic came out in October, and management divulged that October attendance was at 72% of 2019 levels, with admissions revenue up to 90% thanks to price increases. Even better? Management said that last weekend's revenue had exceeded that of the same weekend in 2019, the first time that's happened since the pandemic.

Sure, attendance may not be all the way back, but thanks to both ticket price increases, a preference for premium theater experiences coming out of the pandemic, and higher food and beverage spending, revenue per patron was up 26% over 2019 levels.

And since more and more studios have either shortened their theatrical windows or even released films simultaneously in theaters and on streaming services, AMC has negotiated a more favorable box office split. In the third quarter, AMC paid studios only 41.5% of the box office, whereas in 2019, AMC paid 52.3%.

Theatrical attendance has been ticking down for years, but theater companies have generally been able to offset that with price increases and a more premium experience. It looks as if COVID might even accelerate that trend, but this time, AMC may be able to earn higher gross margins coming out of the pandemic if it can preserve a lower theatrical payout to studios.

Aside from the core business, AMC is exploring a number of alternative revenue streams and had other positive announcements:

None of these ventures individually are likely to move the needle relative to the company's core business, but taken together, they could.

The bad, and the ugly

Of course, in light of all this good news, the stock fell. That's probably due to the pesky little thing called valuation. AMC still burned $138 million in negative free cash flow last quarter, despite the better-than-expected results. Furthermore, this incorporates only maintenance capital expenditures that will be several hundred million dollars less than the company's capex spending before the the pandemic.

Oh, and by the way, the company has even more debt today as a result of the high-priced debt it took out during the pandemic, to the tune of $5.5 billion, versus $4.8 billion as of September 2019. The company does have more cash, however, with $1.6 billion against just $100 million in 2019. Still, a lot of the new debt comes with sky-high double-digit interest rates, increasing net interest expenses relative to before the pandemic.

So to justify the current valuation that's over 20 times the pre-pandemic valuation, AMC's results will have to be a lot better than they were in 2019, when the company made "adjusted" free cash flow of $358.5 million. Today's market cap is 57 times that adjusted figure, so there is quite a long way to go.

And while CEO Aron does own a lot of stock, he is also diversifying his assets. On the conference call, he noted:

[I]n September of 2021, I would turn 67 years of age, a youthful, vibrant, vigorous full of life 67, I might add, but 67 nonetheless. Prudent estate planning suggests I should diversify my assets a bit. ... I expected to sell some AMC shares before year-end and that I would do so under the auspices of a so-called 10b5-1 plan, where I give up stock trading control and turn it over to an independent bank. ... So you should expect to see some stock transactions shortly on my behalf.

Aron will still own a lot of shares after the sales, but these sales from a highly enthusiastic CEO is a sign that, at the very least, AMC isn't exactly undervalued.

In spite of impressive operating performance in tough conditions, AMC's shares still remain extremely expensive and the stock remains extremely risky. Even down 11% relative to Monday, these prices offer investors a chance to "diversify their assets" a bit as well, just as AMC's CEO is doing.