After blazing a trail of success in terms of revenue, earnings, and stock market value throughout 2020's COVID-19 lockdowns, at-home streaming exercise company Peloton Interactive (NASDAQ:PTON) appears to have ridden off a cliff with its fiscal first-quarter 2022 results.

Released on Nov. 4, the report missed several analyst consensus targets, and management cut guidance to the bone. While Peloton's stock price only fell 4.6% by market close, after-hours trading torpedoed its value, collapsing it more than 30% in a few hours.

Peloton management maintains it can still carry on, but getting the stock back up to a high valuation looks like it's going to take a long time or some significant changes. 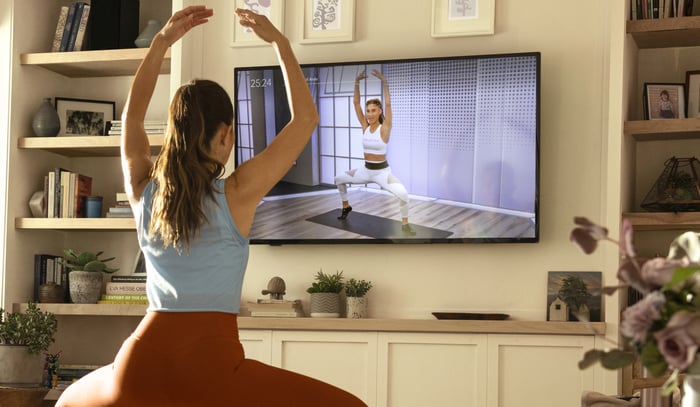 Peloton's year-over-year results included several positive metrics within the narrow focus of quarterly growth. Its $805.2 million in revenue edged upward 6% year over year, while connected fitness subscriptions rose 87% and digital subscriptions increased by 74% compared to fiscal Q1 2021. The company is still operating with a net loss of $376 million, which translates to an earnings per share (EPS) figure of negative $1.25. The company missed consensus Wall Street forecasts at both the top and bottom lines.

Zooming out to the big picture, however, reveals more alarming trends. Connected subscriptions are indeed up sharply year over year but compared to the third and fourth fiscal quarters of 2021, the growth is leveling off into a plateau. Quarterly revenue of $805.2 million is down sharply from the peak of $1.26 billion in Q3 2021, continuing a trend of decline already visible in Q4 2021. Connected fitness quarterly workouts have fallen 19.4% since Q3 2021, and the average monthly workouts per subscription plunged approximately 36.2%. 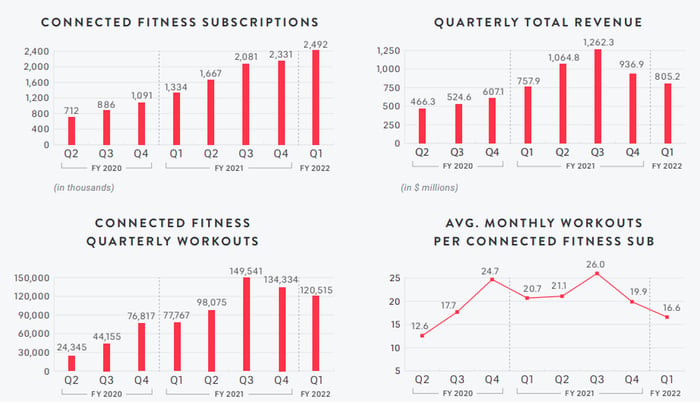 This data shows that while subscription numbers are still growing, people with subscriptions are using Peloton's services substantially less than in previous reports. Reduced numbers of exercise machine deliveries, combined with Peloton Bike price cuts, caused segment revenue for "connected fitness" to drop 17% and the segment's contribution to overall revenue to shrink to 62%. Subscription revenue accounted for 38% of total revenue and saw its segment revenue rise 94%.

The company's revenue, in short, is moving in the direction of subscriptions rather than big-ticket exercise machines such as the Bike. So far, it doesn't seem to be generating more revenue as it hoped by offering a more affordable bike, and the price cuts are simply cutting into profitability, at least for the time being.

Peloton also slashed its fiscal 2022 full-year guidance. It expects to end the year with 3.35 million to 3.45 million subscriptions, down somewhere between 5% and 7.7% from the 3.63 million it guided for three months ago in its fiscal Q4 2021 earnings report. Total revenue of $4.4 billion to $4.8 billion is an 11.1% to 18.4% drop from the previous guidance of $5.4 billion. It now expects adjusted earnings before interest, taxes, depreciation, and amortization (EBITDA) to come in at negative $425 million to negative $475 million, a 30.8% to 46.2% greater loss than the $325 million negative EBITDA it predicted earlier, while gross margin is expected to be 32% rather than 34%.

All of this points to a much weaker-than-anticipated upcoming year and likely accounts for the strongly negative response of the stock market, more than specific Q1 results. Peloton achieved its winning streak through 2020 largely thanks to the closure of physical gyms during the prolonged, drastic lockdowns imposed by the government in response to COVID-19. Now that gyms are reopening, how is the streaming workout provider faring relative to its physical gym space competitors?

Peloton finding its place in the post-lockdown exercise world

Americans appear to be returning to brick-and-mortar gym exercise, according to Planet Fitness (NYSE:PLNT) CEO Chris Rondeau. Membership has climbed back to 97% of its pre-lockdown level, Rondeau told CNBC, with 15 million people now signed up for the workout company's services. This continues a trend already visible in June when a Jefferies analysis reported that gym traffic had reached 83% of the level it was at a month before COVID-19 arrived in America back in 2020.

The rapid surge back into physical gyms is obviously cutting into Peloton's growth, but it doesn't necessarily mean the company will wither away and go bankrupt. A favorable sign for the company comes from NPD Group research indicating a considerable number of people are choosing to get both in-person gym memberships and subscriptions to at-home streaming workout services. Exercise equipment sales for the first eight months of 2021 surged 108% over 2019's figure and 20% compared to 2020, NPD said, indicating people are still buying large numbers of workout devices for home use. Jefferies analyst Randy Konik also highlighted many people opting for "a hybrid approach, using the plethora of digital concepts and traditional gym experience."

These trends and metrics suggest Peloton isn't likely to go out of business anytime soon. However, they also indicate it can probably no longer sustain its soaring share value with physical gyms reopened and people swarming back to them. Its faltering performance and sharply reduced guidance both support the picture of contraction. While Peloton still has upsides and will eventually reach a new price better suited to a more limited role in its sector, it no longer looks like the best option among gym stocks. For now, it's probably best to avoid it until a new equilibrium is reached, enabling the restart of reliable growth.