The two 3D printing companies recently released their third-quarter results. Here's how they stacked up in a metric-by-metric comparison.

Keep in mind that qualitative factors can be just as important as quantitative ones, and we're looking at just one quarter's results. Even with these caveats, however, the data in this article should help you make better investing decisions in the 3D printing space. 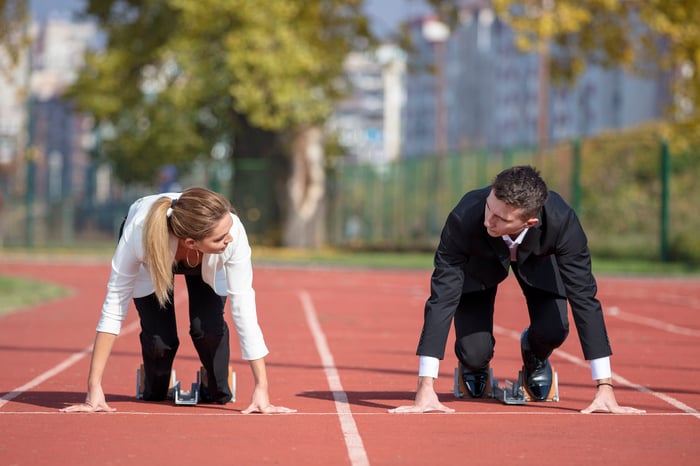 This one isn't clear-cut. Calling it a tie seems fair. Stratasys' revenue grew the fastest from the year-ago period. However, 3D Systems performed better when we exclude the impact from the divestitures of its non-core assets.

Both 3D printing companies performed solidly, though they had relatively easy comparables because of the pandemic. Many industrial companies were still cautious with their ordering in the third quarter of last year.

The healthcare vertical was the star performer for both companies, as has been the case for some time. In the third quarter, 3D Systems' healthcare revenue surged 28% (45%, adjusted for divestitures) to $76.4 million, accounting for 49% of its total revenue. Stratasys doesn't break out its results by vertical but did say in its earnings presentation that healthcare is its fastest-growing business.

This category is included just for information purposes. GAAP results don't strip out one-time items, so they're often not comparable. 3D Systems' result, for instance, got a big boost from the company's sale of its noncore assets. That's the only reason it's positive.

3D Systems wins this category because it had the higher adjusted profit relative to revenue.

Stratasys easily takes the gold medal here. 3D Systems' year-over-year decline in adjusted gross margin was primarily driven by its divestiture of noncore assets. However, absent this factor, Stratasys would still have won.

A higher gross margin relative to a competitor with a very similar business profile can reflect stronger pricing power.

Both companies are in great shape from a balance sheet standpoint, with each having roughly half a billion dollars and no debt. However, 3D Systems gets the win because it generated much more cash running its operations than Stratasys did, relative to its revenue. 3D Systems turned 13.3% of its revenue dollars into cash from operations, compared to Stratasys' 1.9%.

Stratasys spent a higher percentage of its revenue on research and development (R&D), as well as a higher absolute dollar amount.

Investing in R&D is critical for companies in technology-related businesses if they want to stay competitive.

Keep in mind the two caveats mentioned at the opening of this article: Qualitative factors can be as important as quantitative ones, and we only looked at one quarter's results. Long-term investors shouldn't put too much weight on any single quarter's data. In addition, we also didn't look at stock valuations.