Shares of Beazer Homes (NYSE:BZH), one of the largest homebuilders in the United States, rose by as much as 18% on Thursday. By the close, they had given back some of those gains, but were still up by roughly 15%. The big news was the company's fiscal fourth-quarter 2021 earnings release, which hit the newswires after the market closed on Wednesday.

Beazer's fourth-quarter and full-year results were a bit mixed. For example, Q4 revenue of $589.1 million was 13.2% below the year-ago level. Driving that was a 19% decline in home closings, partially offset by a 7.1% increase in home prices. For the full fiscal year, revenues were basically flat (up 0.5%) with a 4.4% increase in home prices offsetting a 3.7% decline in the number of closings. Fewer homes sold at higher prices isn't exactly the best outcome, but it isn't terrible, either.

That said, earnings per share for the quarter came in at $1.57, up notably from $0.82 in the prior-year period. The improvement was partially thanks to cost containment efforts and, more importantly, a 1.5 percentage point increase in homebuilding gross margins. For the full fiscal year, meanwhile, Beazer earned $4.01 per share, up from $1.78, with the help of a 2 percentage point improvement in homebuilding gross margins. 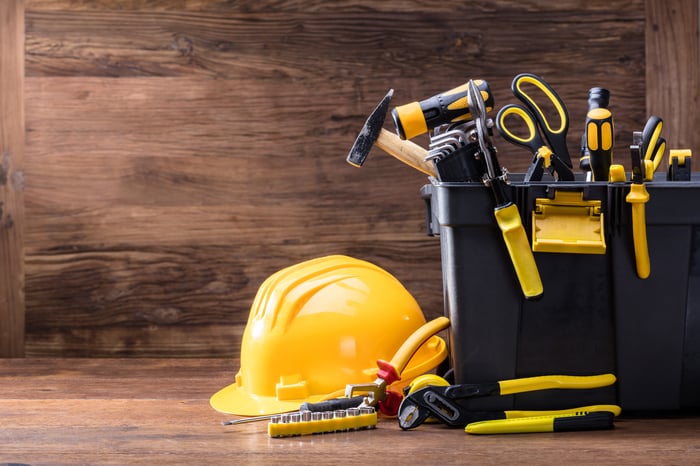 What deserves a little more thought is the decline in homes sold, a result that was heavily connected to the supply constraints rippling across the U.S. economy. There's not a lot Beazer can do about that issue other than attempt to adjust to it. Which is what the home builder did, in fact, as it looked to slow down its sales pace to better match its building capacity given the current supply issues. As such, new orders were down 46% year over year in its fiscal fourth quarter. Typically that's not something an investor would want to hear, but given the situation today, it's not such a bad thing. And even with that decline in homes sold, Beazer's backlog currently sits at nearly $1.3 billion, up from about $1 billion at the end of its fiscal 2020. That growth was largely driven by a 16.2% rise in the average home price in the backlog. So times are tough, but simultaneously good.

Against this backdrop, management is projecting that fiscal 2022 earnings will come in above $5 per share. That suggests that Beazer is expecting to manage the current supply headwinds and deliver a huge 20% earnings increase over the next 12 months. No wonder investors were pleased.

Homebuilding is a notoriously cyclical industry, tracking with the conditions of the broader economy. It is prone to boom and bust cycles, and the pendulum has swung to the boom side. It is probably not the best sector for risk-averse investors. That said, assuming that the company's backlog holds up, Beazer seems set to post another solid year in fiscal 2022, and it looks like that's why investors were bidding its shares up Thursday.