If you want a taste of cryptocurrency before jumping in with both feet, consider investing in a stock that gives you some exposure.

Cryptocurrency has become a hotly debated topic, with Berkshire Hathaway's legendary leader Warren Buffett saying "I don't have any cryptocurrency and I never will," and Tesla's Elon Musk touting Dogecoin at seemingly every opportunity.

For the rest of us earthlings, a more balanced approach might be warranted. And the best way to do that might be to invest in regular companies that have some exposure to cryptocurrency. That's why I would buy shares of MercadoLibre (MELI -4.87%) stock instead of Bitcoin (BTC -4.03%).

Fintech and e-commerce in a huge, underdeveloped market

These have been growing a long time but they were a particular hit during the pandemic when shopping went digital. Year-over-year growth was in the triple digits for the past five quarters, though that changed in the third quarter, announced last week. It was still a really good quarter, with revenues increasing 73% to $1.9 billion on top of 149% growth last year, and topping the pre-pandemic 2020 first-quarter 71% growth rate.

Gross merchandise volume (GMV) increased 30%, total payment volume (TPV) increased 59%, and off-platform TPV, or payments outside of the MercadoLibre platform, increased 79%.Nearly 80% of orders were delivered within 48 hours, and more than half were delivered the same or next day.

These numbers demonstrate that even past the worst of the pandemic, business is brisk. And there are millions of reasons to believe that it can continue for a long time, because the company has a huge market of millions of people in Latin America that are still getting their feet wet in digital payments and e-commerce.

MercadoLibre is a market leader in the 18 countries in which it operates, including its home country of Argentina, which still accounts for its highest growth. Its two other largest growth markets are Brazil, the largest Latin American country with a population of over 212 million, and our North American neighbor, Mexico.

According to a JPMorgan report, Brazil is still lacking digital infrastructure, but it prefers mobile payments. That mobile focus gives MercadoLibre plenty of runway to grow its business there. 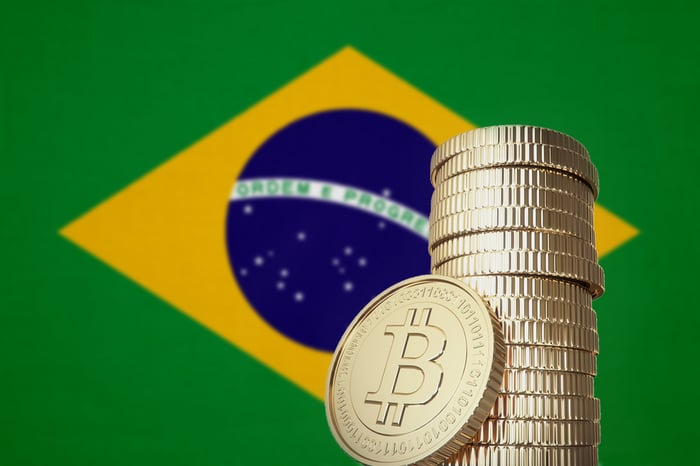 What does it have to do with Bitcoin?

Many fintech companies are waking up to cryptocurrency's assurgency. Customers are trading it and using it, and payment app operators are expanding their cryptocurrency services to give their customers what they want, as well as make money from them. PayPal and Square both offer some form of cryptocurrency trading, and Square itself has bought more than $200 million worth of bitcoin.

In the same vein, MercadoLibre purchased nearly $8 million in bitcoin for its treasury this year. CFO Pedro Arnt gave two reasons for the small-scale bitcoin purchase. One is that it's a "good use of long-term store value for our treasury at the right amount and at the prudent amounts." The other is that cryptocurrency has an obvious connection to financial technology, and the company is getting its hands on some as it develops customer-centric features.