The best companies have good long-term growth stories. These are companies where management thinks decades ahead, not just quarters ahead. One company that has done a stellar job of building out its business is Goosehead Insurance (GSHD 4.99%).

Goosehead Insurance has established itself as an insurance agency that looks to innovate the way personal lines of insurance are sold. It manages multiple types of insurance policies, including home, auto, life, and business insurance plans. The company's growth story can be told in three parts: 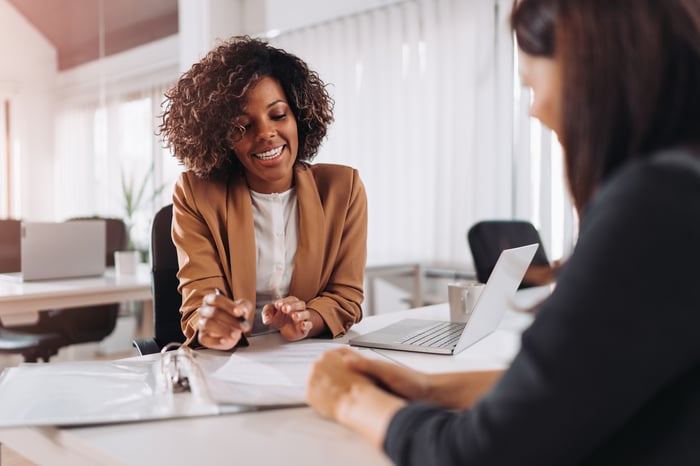 Goosehead's long-term success will come from building up its franchise channel. Since 2018, it has grown its franchise count by 203%, or 50% compounded annually.

Renewal royalty fees, earned through the company's franchise channel, are management's preferred long-term revenue source. They have predictability and high profit margins. Renewal royalty fees can especially be lucrative because of how its revenue-sharing terms step up when franchisees renew. In the initial agreement, Goosehead earns royalties of 20% from its franchises. However, when franchise agreements are renewed, these royalties jump to 50%.

As the company expands and renews agreements with franchises, higher profits will follow. The term of a franchise license is typically 10 years, so this step up in profits will benefit the company more as the decade goes on. Renewal royalty fees made up 32% of its revenue and in the third quarter, this revenue grew 63%.

Total franchises increased 55% from last year to 1,958, while franchises up and running are up 38% to 1,139. As a result, franchise revenue was up 53% to $19 million in the quarter. The franchise channel and renewal of policies drove Goosehead's revenue higher in the third quarter, coming in at $41.7 million, up 30% from last year. Meanwhile, net income of $5.4 million was down 20% from last year.

The third quarter mirrored Goosehead's full-year earnings, where top-line growth is solid and bottom-line numbers lagged. Through nine months, revenue of $111 million is up 35% from last year, while net income of $7.4 million is down 46% from last year. The biggest reason net income is down is increased expenses, up 55% compared to the previous year.

Expenses increased due to compensation and benefits, up 48% through nine months this year as Goosehead's employee headcount increased 41%. General and administrative expenses increased too, up 73% due to increased operating franchisees, increased employees, three new corporate office locations, and technological investments.

Goosehead is focused on scaling its business, and higher expenses are expected as it works toward that goal. What I find most appealing about the company is its focus on long-term growth and its business model that sets it up for success, making Goosehead an attractive growth stock investors could hold for the next decade.

Here's a Fast-Growing Stock Down 70% You Can Buy Today

This Growth Stock Near Its 1-Year Low Has 93% Upside, According to Wall Street