With the construction industry severely under-digitized, Procore has a greenfield opportunity ahead of it.

Procore Technologies (PCOR -4.34%), the construction-management software company that went public earlier this year, just reported its third-quarter earnings. With strong growth across several metrics, the company appears to be taking further steps in its effort to connect the entire construction industry.

Following an IPO, companies can experience a lot of volatility due to either quick or disappointing growth. Earnings season tends to bring further fluctuations in a company's stock price. Procore's stock has only grown nearly 5% year to date, but here's why this quarter should have investors excited about what's ahead. 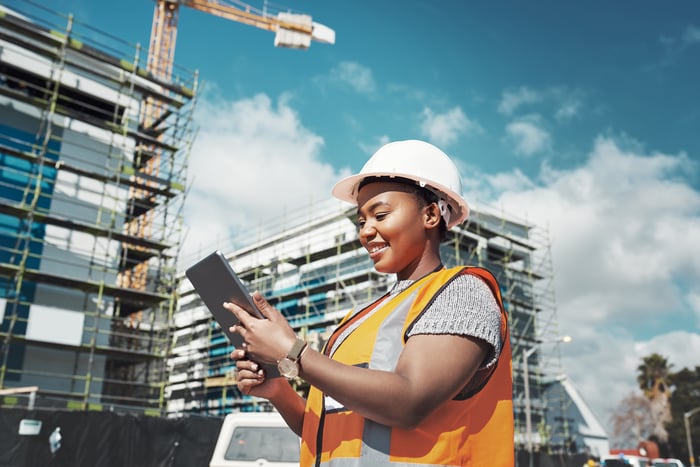 Before getting into some of the new initiatives at Procore, it's worth taking a look at the company's recent financial results. During the third quarter, it generated $132 million in revenue, a 30% increase from the same period a year prior and $5 million above the high end of its own guidance. Procore also added 456 net new customers during the quarter for a total customer count of 11,605.

Since it charges its customers based on their annual construction volume (ACV), and not on a per-seat basis like many software companies, investors also have to keep an eye on the construction industry at large. In the company's conference call following the earnings release, CEO Tooey Courtemanche said, "For the most part, backlogs are healthy and growing," but he also went on to mention that supply chain issues and labor shortages are overwhelming many smaller players in the industry. Though these hiccups might be temporary, in the short term, companies with constrained resources could delay adopting new solutions like Procore's platform.

But even amid these slight problems, it was able to exceed its own expectations for profitability. The company generated roughly $15 million in operating cash flow and $6.5 million in free cash flow for the quarter with an adjusted operating margin of negative 4% -- above its guidance of negative 7% to negative 8%. These operating losses shouldn't come as much of a surprise now that Procore is flushed with cash from its recent initial public offering (IPO) and using that cash to invest for growth.

Aside from simply beating its own financial expectations, Procore made several new announcements about its platform that should have big implications. During the third quarter, the company announced that it acquired two new companies, LevelSet and LaborChart. Though they serve different purposes, each solution is digitizing a traditionally manual process. LevelSet helps companies navigate lien compliance so that they get paid on time. While LaborChart provides an easy-to-use workforce management software so contractors don't have to rely on whiteboards for a crucial component of their daily operations.

Both LevelSet and LaborChart weren't included in the company's financials for the quarter, but Procore's customers already seem eager to get their hands on each new solution. Courtemanche even highlighted this excitement in the conference call when he said, "The industry and our customers have been very grateful for the fact that we are tackling this."

But Procore isn't just enhancing its platform through acquisitions. It's also building some impressive new in-house tools. Outside of the modest improvements that the company made to a few of its existing solutions, it also announced that it will be introducing the Procore Construction Network. With over 1.8 million construction professionals now on its platform, this means that all stakeholders in the construction process -- including contractors, suppliers, architects, and even building owners -- will be able to promote their businesses to find new projects. Not only should this add a ton of value for existing Procore users, but it will also likely attract new ones that are looking for work.

An industry that just started building

For investors measuring Procore's valuation based on trailing financial results, it certainly looks like the company trades at a premium. Its current ratio of market cap to trailing-12-month revenue stands at about 26 times, which is well above the average valuation (4 times sales), even for a software company.

However, investors should also keep in mind not only Procore's revenue trajectory but also its longevity. The construction industry is still in the early days of digitization. In fact, despite accounting for 13% of global gross domestic product, construction is the least-digitized industry behind it is only agriculture and hunting, according to estimates by McKinsey. So half the time, it's not just about attracting customers away from competing software solutions, but simply moving them to software to begin with.

CFO Paul Lyandres reminded investors of how gradual the adoption rate is when he said, "This industry is not a speedboat. It's an oil tanker." While the sales growth might not come rapidly, the industry is massive and it's here to stay. As Procore continues adding new solutions to its platform and digitizing complex processes for its customers, companies that refuse to adopt its solution might struggle to keep up.