Investors cheer a smaller-than-expected loss and plans for a successful launch.

Shares of recent special purpose acquisition company initial public offering (IPO) and rocket launch start-up Astra Space (ASTR -4.30%), which got pummeled after a failed launch attempt in August, are reviving after a positive earnings announcement last night, and up 10% as of 12:10 p.m. EST.

Analysts had forecast the space launch company would lose $0.16 per share in its fiscal third quarter, even worse than last year's $0.09 per share Q3 loss. As it turned out, Astra did report a loss, but not as big as expected -- only $0.06 per share. 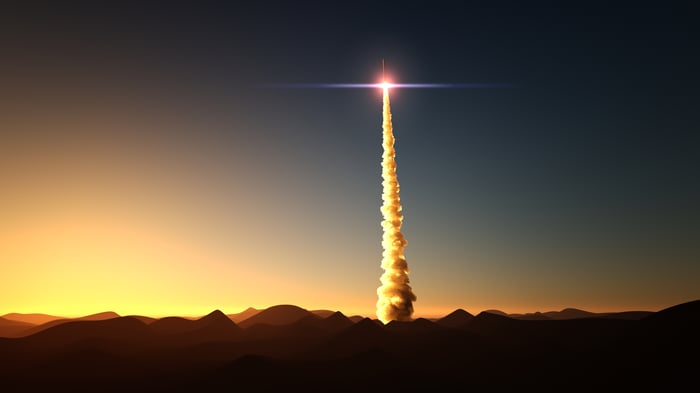 Does that sound like great news? Because it isn't, not really. You see, Astra is what is known as a "pre-revenue" company, meaning it doesn't have any revenue because it isn't launching rockets yet (or at least not successfully).

What Astra does have are expenses, and they added up to a $42.5 million operating loss last quarter. That's actually 5.5 times the company's operating loss of one year ago. However, because Astra issued so many shares during its IPO, the losses got spread out over a vastly larger number of shares, resulting in the smaller per-share loss.

For Astra stock to truly outperform, therefore, its rockets need to begin performing. To that end, management noted that it has a new test launch coming up -- LV0007 -- in the coming week or so. Anticipating success, the company has already begun building two more launch vehicles, LV0008 and '09, of which the first is "near completion" and the second only begun.

Additionally, the company noted that it has already conducted its first "in-space electric propulsion engine ... successful ignition test," and also filed an application with the Federal Communications Commission seeking permission to launch its very own satellite constellation.

So at the very least, it looks like Astra has multiple irons in the fire, any one of which might work out and start generating some revenue for the company. It all starts with a successful rocket launch later this month, however. Fingers crossed.