Could the chip shortage be the Grinch to steal Apple's Christmas?

The supply chain, still smarting from a global pandemic and labor shortage, threatens to derail some holiday cheer this year. Apple's (AAPL 1.37%) Oct. 28 earnings report delivered the harsh reality that the company is struggling to get the internal chips and necessary components for top new products. With electronics supplies low going into Q4, it seems the Grinch has his eyes on Christmas at Apple this holiday season. But a bumpy sleigh-ride for Apple this winter could mean cost-averaging opportunities for savvy, long-term investors.

What is going on with the supply chain?

This year has already seen fallout from continual supply chain crises arising from the COVID-19 pandemic, and further trouble owing to the Suez Canal blockage in March. Those cascading events put a real pinch on companies that source materials worldwide, and which manufacture in China or other areas where labor costs are low.

Major semiconductor manufacturers rely heavily on raw materials from distant shores, and in its most recent earnings call, Apple addressed how the chip shortage combined with supply chain disruptions to affect the company's previous quarter. CEO Tim Cook bet heavily on Apple's reliance on Foxconn and other manufacturers' ability to get necessary materials from around the world. But shipping delays and COVID-19 woes kept Apple's key suppliers from delivering necessary components, including casings, cameras, and critical internal chips and plastics. 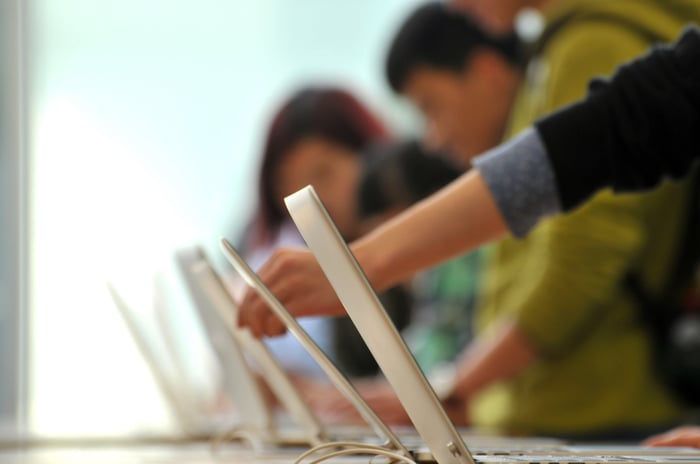 How might that weigh on Apple stock prices in Q4?

Apple's new product launches should have driven much higher profits, but the company's struggles to get materials to the factories, and completed products, cost it somewhere around $6 billion, according to Cook during the earnings call. "Demand was very robust," the CEO stated, but without an appropriate supply, the retailers just couldn't deliver expected sales figures. This led Apple to barely eke out anticipated profits and drove its Q4 expectations lower.

Stores are having real trouble keeping the new iPhone 13 and Apple Watch Series 7 in stock, and Macbooks are backordered months behind delivery. In all likelihood, the final quarter of 2021 will show similar struggles. The subsequent earnings report at the end of January, the one most impacted by holiday sales, could potentially even deliver news of a missed revised earnings mark, something the company barely avoided in late October.

Is now the time to buy a competitor?

Samsung, Apple's largest direct competitor in the smartphone market, has been struggling to keep up supply all year. It was hit with supply chain problems much earlier than Apple was, leaving Samsung in a poor place to capitalize on its rival's Christmas woes.

Samsung's own chip production, primarily server DRAM and memory NAND chips, continues to drive company profits, but its smartphone division has not yet managed to capitalize on the challenges facing Apple. Supply chain failures of raw materials and the logistics capacity to transport finished goods remain an ongoing issue for Samsung going into the close of the year.

Xaomi, OPPO, vivo, and other global competitors also face similar market conditions. Market share may not pass much between the big leaders, but whoever can most effectively move products from raw materials to final delivery has a chance to be a big winner this holiday season.

Look toward Black Friday and Cyber Monday sales for an early indicator of who can get goods on the shelves at the start of the season. But the real proof in the Christmas pudding will be December's holiday numbers. The National Retail Federation is likely to provide a great bellwether for these events as the season progresses.

Apple signaled that it may have some relief on the way, as chip manufacturers work to address delivery concerns and scale up production. The company has invested heavily in its own chip design and proprietary production following its split with Intel (INTC -6.41%) last year.

While there's no immediate end in sight to supply chain woes, major chipmakers including Nvidia (NVDA 2.84%) and Intel are beginning to adjust to this "new normal," prioritizing top players and ramping up production in the areas where they are needed most.

Intel CEO Pat Gelsinger believes "the chip shortage is at its worst right now. It will get incrementally better as we go through '22, but we expect the shortage to persist into 2023. It just takes that long to build capacity." Barring any major news out of its logistics teams or manufacturing suppliers, Apple is likely stuck in the same rut as it was leading up to the October earnings call.

The holiday season has traditionally been very good for Apple, but it's likely that the next quarterly report will show the same issues as the previous one. The company is strong and in no real risk of collapse, but these quarterly difficulties may help bring prices down and allow for cost-averaging or even quick pickup of Apple shares at bargain-bin prices before the inevitable rebound, as manufacturers shift to support the biggest players over the next two years.

Late in Apple's fourth quarter, as sales numbers begin to trickle in, or even immediately following the next earnings call might be the best time to swoop in and grab Apple stock before its highly probable recovery. Also, holding onto Apple through the long winter instead of selling on a predictably soft earnings report can keep losses at bay. One investor's Grinch might just be another's roast beast.