The company reported some good news in an important Asian market.

Novavax (NVAX -6.50%), best known these days for the NVX-CoV2373 coronavirus vaccine it's developed, saw its shares rise by 1.5% on Monday, against a stock market that essentially traded sideways. Investors seemed to be cautiously optimistic about the company's latest news on the regulatory front.

Novavax announced that it has formally submitted a biologics license application (BLA) for NVX-CoV2373 to South Korea's Ministry of Food and Drug Safety. It has done so in collaboration with South Korean biotech SK bioscience. 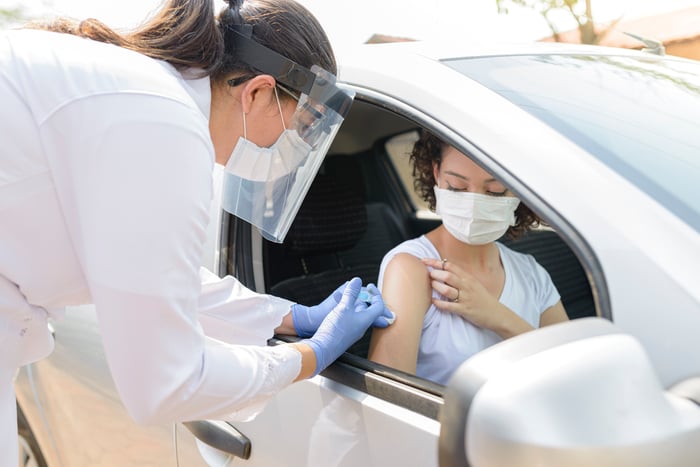 That move comes slightly over half a year after Novavax and SK bioscience started the rolling submission process to the Ministry. If the country approves the BLA, it will be a ready customer for the vaccine, as SK bioscience has secured an advance purchase agreement with the government for 40 million doses.

Although NVX-CoV2373 still hasn't been submitted for authorization by the FDA in the crucial U.S. market, it has won nods in various other jurisdictions, for example in Indonesia. It is under review in a clutch of others, including the U.K. and Canada.

Novavax didn't hesitate to point out that the South Korea filing marks a big step forward for NVX-CoV2373. It quoted CEO Stanley Erck as saying that the submission "reflects the first BLA submission for full approval of our COVID-19 vaccine anywhere in the world, with more anticipated to follow."

The news was tempered by the hard fact that Novavax would be far from a first mover in South Korea. All three vaccines either approved or authorized for emergency use in the U.S. -- Moderna's mRNA-1273 (aka Spikevax), Pfizer and BioNTech's Comirnaty, and the single-dose vaccine from Johnson & Johnson -- all have that status. AstraZeneca and Oxford University's AZD1222 has also won approval.