One hit all-time lows, while the other is pulling back from solid gains.

The stock market has done extremely well lately, and the Nasdaq Composite (^IXIC 0.95%) started to move back toward record levels on Tuesday. Gains of more than 0.5% as of noon EST brought the Nasdaq  to within about 100 points of its all-time highs, and investors are optimistic about the prospects for the growth stocks that play such a huge role in the Nasdaq's success.

Yet even with overall gains, not every Nasdaq stock managed to post gains on Tuesday. Indeed, MercadoLibre (MELI 2.75%) and Robinhood Markets (HOOD 7.78%) were both down fairly sharply during the early part of the session. With so many investors looking closely at growth prospects for the broader market, one question is whether these two stocks could see further losses. Below, we'll take a closer look at MercadoLibre and Robinhood to get some answers.

Shares of MercadoLibre were down more than 6% at midday on Tuesday. Investors weren't pleased to see the Latin American e-commerce giant selling some of its equity to raise cash. 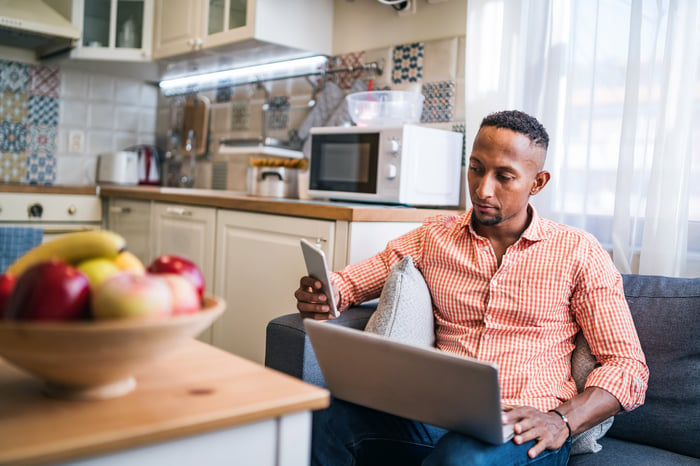 MercadoLibre announced the pricing of its equity offering of 1 million shares, and the results weren't entirely pretty. Investors were willing to pay $1,550 per share for the newly offered MercadoLibre stock, and that was well below the $1,633 closing price for the shares on Monday. That led to some dilution for existing shareholders, and the drop of more than 6% actually took MercadoLibre's share price more than $20 below the offering's $1,550 price per share.

Yet the fact that MercadoLibre is raising capital points to the ongoing efforts the e-commerce company has made to keep up with the fast pace of competition in its industry. The development of key tools like the Mercado Pago electronic payments business has greatly enhanced MercadoLibre's value. Investing in more value-building efforts could have positive long-term impacts that outweigh the short-term costs.

E-commerce is here to stay, and MercadoLibre is a true industry winner in a key part of the world. The company has a long growth runway ahead, and that makes pullbacks like today's worth considering as a buying opportunity.

Elsewhere, shares of Robinhood Markets were down almost 5% on Tuesday at midday. That sent shares of the mobile-powered brokerage company's stock to their lowest level since it went public earlier this year.

Robinhood is just one example among many companies that are struggling to meet high expectations from shareholders. The company's 35% sales growth in the third quarter of 2021 fell well short of what investors had wanted to see, and fears of further slowdowns in activity and revenue led the stock to fall below its initial public offering price. Losses ballooned while user counts and revenue per user were lower from where they had been three months earlier.

More broadly, Robinhood is dealing with a number of operational issues. A data breach exposed millions of customers' names and email addresses, and regulators are increasingly critical of its use of payment for order flow to support $0 commissions on stock trades. Cryptocurrency markets remain volatile, and some of the speculative fervor that helped support Robinhood's income in the past seems to be slowing.

Robinhood's prospects to bounce back fully from its recent setback aren't as clear as MercadoLibre's. The mobile trading app is popular among its customers, but with substantial competition on the cutting edge of financial services, Robinhood will have to work hard to keep its leadership position.

Is Global E-Commerce Really at Risk?

These 2 Stocks Are Popping After Hours Tuesday
405%