The departure of one CEO, two co-founders, and a big top-line miss combine for an awful market day for the company.

Online therapy-services provider Talkspace (TALK 0.27%) had quite a day on the stock market Tuesday, but that was far from a good thing. A major development in the C-suite and a quarterly revenue miss combined to drive the company's share price down a very steep 36%.

After market hours on Monday, Talkspace released its Q3 results. These reveal that the company earned $26.4 million in net revenue for the period, 23% higher on a year-over-year basis. That was on the back of 21% growth in the number of the company's total active members (to roughly 60,300). Net income came in at $1.5 million ($0.01 per share), representing a flip from the $2.7 million loss of Q3 2020. 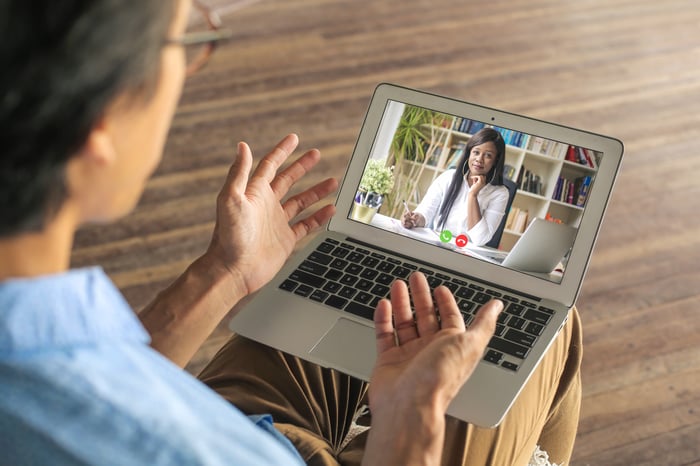 It was a mixed quarter for the specialty-healthcare provider, as analysts following the company were estimating it would book $31.9 million on the top line but post a $0.09 per-share net loss.

Admitting that the quarter was "disappointing," Talkspace's Jennifer Fulk was quoted as saying that the net revenue figure wasn't as high as expected thanks to "a lower number of [business-to-consumer] customers and a one-time non-cash reserve adjustment for credit losses on receivables related to prior periods."

Concurrent with the Q3 results, it did announce that CEO and co-founder Oren Frank is stepping down from his position, effective Tuesday. He's also relinquishing his seat on the company's board.

Co-founder Roni Frank -- who was serving as head of clinical services -- is also vacating her board seat. The two Franks will serve as strategic advisors to the board over the next six months "to provide continuity and strategic direction," for the company.

Talkspace said it has retained well-known executive search firm Korn Ferry to assist it in the hunt for a new CEO. Board chairman Douglas Braunstein is to serve as interim CEO until a permanent replacement is found.

3 Disruptive Mental Health Stocks to Consider Buying Before They're Huge

Why Shares of Talkspace Tanked on Tuesday
401%