Investors might have found the company's flip into the red on the bottom line distasteful.

Investors rained on pellet grill maker Traeger's (COOK 8.07%) barbecue on Tuesday, pushing the company's stock price down by nearly 16% despite the fact that Traeger notched beats on both the top and bottom lines in its latest quarter.

Immediately after market hours Monday, Traeger released its third quarter figures. These showed that total revenue landed at $162 million for a nearly 12% year-over-year improvement. In contrast, on the bottom line the company flipped to a non-GAAP (adjusted) net loss of $6.5 million ($0.06 per share) from Q3 2020's $24 million profit. 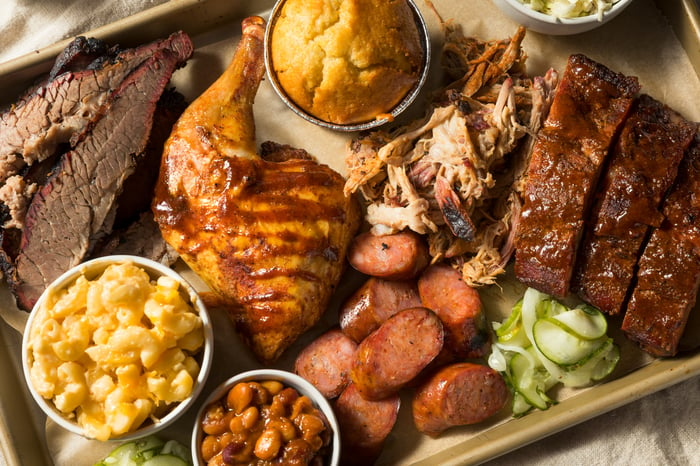 Despite the fresh red ink, Traeger beat on both line items. Collectively, analysts tracking the stock were modeling revenue just shy of $141 million, and an adjusted per-share net loss of $0.08.

In the earnings release, Traeger quoted its CEO Jeremy Andrus as saying that the quarter demonstrated his company's "ability to navigate supply chain challenges to successfully meet demand." He also pointed to the recently launched Traeger Provisions, a premium meal box service, as a business with good potential.

Traeger reiterated its guidance for 2021, with the caveat that results will likely continue to be affected by those supply chain difficulties. The company anticipates that full-year total revenue will be $760 million to $770 million, with adjusted earnings before interest, taxes, depreciation, and amortization (EBITDA) coming in at $103 million to $108 million. On average, analysts are estimating $764 million.

Traeger did not proffer any net profit estimates.

The company seems to be headed in the right direction in numerous ways. While it posted encouraging revenue growth, investors might be spooked by that not-entirely unexpected lurch into the red on the bottom line. Perhaps this drop in the stock price provides opportunity for Traeger bulls to snap up some stock on the cheap.

Could Investors in This Small-Cap Stock Be in for a Rude Awakening in August?

Will Traeger Sizzle or Smoke This Summer?

Why Traeger Stock Got Smoked Today

Why Traeger Stock Was on Fire Monday
405%