No matter what type of property you're buying, you need a home inspection. It could be the one thing standing between you and a major financial catastrophe.

Every home has its little secrets. New or old, there are things you don't even know about, lurking in plain sight such that you may not even realize you should give them a second thought. Simple problems, like leaky faucets or damaged flooring, are easy enough for any homebuyer or real estate investor to see on their own. When you're not especially well-versed in every type of architecture or common problems in your area, though, would you know when something was amiss with, say, a radiator system or casement windows?

These are the basic reasons all Realtors give you for needing a home inspection with a home purchase. And they're not wrong. An expert will help you find all the visible problems, and quickly, as well as ensure they're repaired right. They can also save you from major financial destruction, should you pick the unlucky house with the scary crawl space or attic. 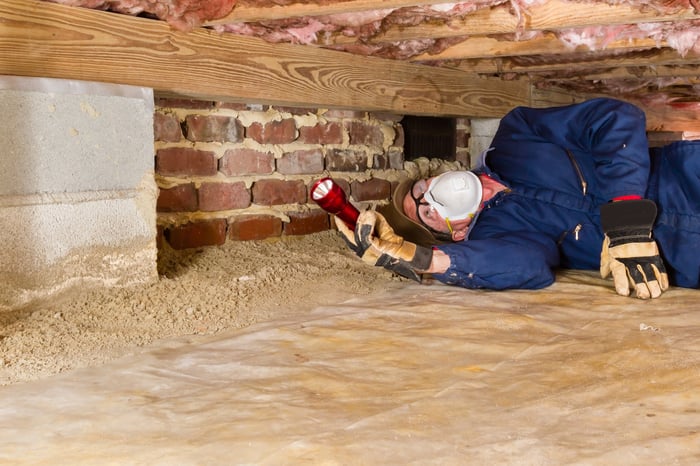 What a home inspection covers

First, it's important to understand what a home inspection is good for, because it's not necessarily what people think. A home inspector can only inspect what they can see, so anything that's going wrong inside a wall void, for example, or inside of a pipe, is a whole other thing. Sometimes inspectors will pick up on other issues that aren't exactly visible but can be sensed by the way the floor flexes when they walk across it, or with tools like radon detectors.

You can expect a home inspector to do as complete and thorough a job as possible (my last home inspection was 73 pages long!), but things that are hidden behind materials that can't be removed won't necessarily be considered part of the scope of even the best inspection. Fortunately, there's not a lot that goes wrong inside a wall void that's closed, and even plumbing and electrical can usually be partially observed in attics or crawl spaces.

Even without access to inspectors with X-ray vision, trust me on this: Always get a home inspection.

Once upon a time in a crawl space

Although it's difficult to find solid numbers on just how many home inspections result in serious problems, a self-report survey from Porch.com found that 86% of respondents had home inspections that found something that needed to be fixed. Of those, 19.7% were roof repairs, 18.7% were electrical repairs, 13.6% were plumbing repairs, 9.9% were air conditioning units, among other, potentially less expensive items.

In my own career as a Realtor, I'd also heard innumerable examples of things that home inspectors have noticed that were absolutely dangerous and needed to be fixed before a new buyer took over the care of a house. A lot of them don't sound all that dramatic. After all, what even is a flying splice? (Spoiler: It's a type of improperly wired electrical connection that can cause a house fire.)

But no one remembers the flying splices their inspector saved them from. They remember the dirty and dramatic, and I can assure you that I do, too.

The year was 2005, and I was looking at a property for myself. It was a gorgeous 1894-model Victorian home in a neighborhood filled with the same. A remodeler had just finished with it, and a lot of people would have assumed this meant it was in tip-top shape.

Still, I had a home inspection.

And what we discovered, much to our surprise, was that the house wasn't actually connected to the sewer.

Sure, the drains were run, but somewhere between the end of the drain pipe under the house and the main, things didn't quite...connect. No one had noticed, because this particular home once had a storage cellar that had been bricked in long ago. This created a sort of pool where everything flowed, resulting in what can only be described as an unintentional septic tank.

The house had other issues, very minor by comparison, but for its age, it was in reasonable shape. Well, except for that septic issue. It was a really alarming revelation. But because there was a home inspection, we went back to the remodeler and made the repair a term of our purchase.

The couple of hundred bucks that home inspection cost (remember, it was 2005) saved us thousands of dollars. And if the remodeler had decided he didn't want to fix the sewage lake under the house? Well, we could have walked away with no fault.

So in summary: No one will ever accuse you of acting in bad faith when you refuse to accept an undisclosed basement...ahem..."water feature." It is one of the many reasons why taking the extra time to get a home inspection done will always be the best decision.

Why Shares of Redfin, Zillow, and Anywhere Real Estate Are Surging This Week
415%