The latest quarterly update didn't give investors much more optimism that the company has turned things around yet.

A year ago, Lordstown Motors (RIDE 7.50%) was one of several promising electric vehicle (EV) upstarts. The company acquired a former General Motors factory in the Ohio town that bears its name and seemingly raised enough money through a merger going public to get its plans to build the Endurance pickup truck underway.

Founder and then-CEO Steve Burns said his plans to sell the truck to fleet customers from municipalities to utility companies would differentiate the company from other EV start-ups, and there was plenty of interest -- and pre-orders -- from potential customers. But that's when things started going downhill, and last week's quarterly business update didn't indicate that the company has yet turned the corner. 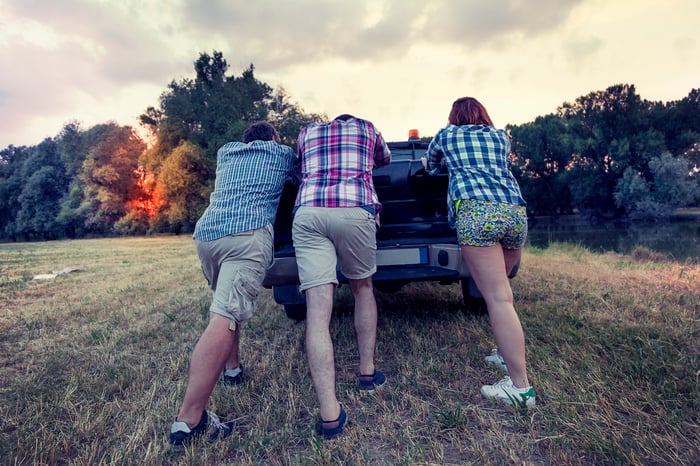 The route takes a detour

In addition to telling investors there were plenty of customers waiting for the Endurance trucks, Burns said he planned to get the vehicles to market by September 2021, ahead of much of the coming competition. But things began to unravel in March 2021, when a short-seller report accused the company, and Burns, of faking orders and claiming unattainable production goals.

Burns, along with the CFO, subsequently stepped down in June, and a new CEO was appointed in August. Lordstown also revised its financial and operational guidance around that time. It also pivoted with its plans and announced in September that it expected to partner with electronics manufacturing giant Foxconn to sell that company the manufacturing plant and have Foxconn build the Endurance electric pickup truck.

Another update, another delay

Last week, Lordstown confirmed it has reached an agreement with Foxconn that includes the sale of most of the Ohio factory, along with plans to pursue a longer-term manufacturing contract. If concluded, that would involve a joint venture agreement for designing and developing future electric commercial fleet vehicles.

That seemed like good news and a nice step forward. And investors rewarded the stock after that announcement. But the company followed that up with its third-quarter business and financial update that didn't go over as well with investors. Lordstown CEO Dan Ninivaggi summed up the current state of affairs, saying, "The third quarter marked a significant strategic shift for Lordstown Motors."

The company followed that summation with news that commercial production and deliveries won't begin until at least the third quarter of 2022. That's a full year delay compared to what the company had plans for in late 2020.

The factory sale agreement with Foxconn will help provide Lordstown with needed capital. It expects to end 2021 with between $150 million and $180 million in cash on its balance sheet after it receives an initial $100 million from the $230 million factory sale.

Lordstown didn't provide its capital expenditure expectations for 2022, so it is unclear whether its cash balance, and subsequent payments due, will carry it to the point where it is receiving revenue from sales of the Endurance truck.

Investing in the stock now would have to include the assumption that Lordstown is capitalized to get to the point of vehicle sales next fall. There would be further clarity if the transaction with Foxconn closes as planned by the end of April 2022. Investors should be aware that, until then, it's unlikely the stock will move much higher short of a new, unforeseen catalyst.