The company's impressive growth doesn't look like it'll be slowing down anytime soon.

Ever since the online dating conglomerate Match Group (MTCH -5.01%) first started trading publicly back in 2015, it has strung together several consecutive years of impressive growth -- and the most recent quarter was no exception. While the stock is already up more than 12-fold from its initial public offering price, its run doesn't seem to be over just yet.

Here are a few reasons Match Group could be a good fit for investors' portfolios today. 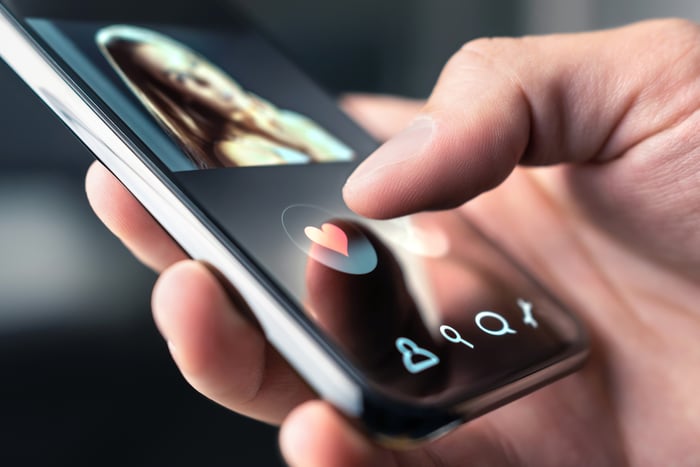 Although Match Group is most well known for only a few of its hit apps, the company is home to dozens of online dating brands. In the third quarter, these brands in aggregate delivered $802 million of revenue and are now on pace to generate roughly $3 billion of revenue for the full year -- up 25% from 2020.

Driven by strength at the company's most notable app Tinder, which grew its paying users 19% year over year to 10.4 million, Match Group also expects to surpass $1 billion in adjusted earnings before interest, taxes, depreciation, and amortization (EBITDA) for the first time ever this year.

But it wasn't just Tinder that accounted for Match Group's strong performance. The company's emerging brands showed stellar growth as well. BLK and Chispa, which both target more specific demographics than Tinder, delivered 80% year-over-year revenue growth in aggregate last quarter. And Hinge, the company's second most popular app, grew revenue by more than 100%.

Though Match Group only acquired Hinge fairly recently in 2019, the brand is already the top-grossing app in the dating category on the Google Play Store, surpassing one of Match Group's only publicly-traded competitors, Bumble. With the tag line "designed to be deleted," Hinge has quickly risen to prominence among younger singles looking for serious relationships. Match Group now expects to generate roughly $200 million in revenue from the brand this year.

But there's another growth lever that Match Group looks poised to pull as well. After acquiring Hyperconnect earlier this year for $1.7 billion, Match Group CEO Shar Dubey mentioned her optimism about using the South Korean company as a development center for new technology. And in this latest quarter, we got a glimpse of that.

Hyperconnect recently began testing a new dating concept on college campuses in Seoul called "Singletown." It's designed to be a virtual world where single people looking for dates can interact with others as their digital selves just by talking. While the product is still in beta and might be a ways away from launching broadly, Dubey appears to have big ambitions for the concept across Match Group's entire portfolio of brands, even mentioning it during the company's quarterly conference call. "Singletown has been built in a way that it can be leveraged by other platforms easily," she said.

Though it's probably too early to tell what implications this concept could have on the company at large, Match Group wants to build new dating experiences that are more "akin to real life," and this is one big step in that direction.

For investors wondering about Match Group's valuation, it will almost certainly look like a hefty price to pay. The company currently trades at a trailing price-to-free cash flow ratio of 48 times. While that's certainly a steep valuation compared to the market average, Match Group has some promising opportunities ahead of it that are also worth paying attention to.

For starters, the company expects to pay $550 million in app store fees in 2021. Though it's difficult to forecast how these fees might change, it's clear that both Alphabet and Apple have been under severe regulatory pressure lately. Any forced decrease in fees would automatically result in a higher take rate for Match Group.

The company also benefits substantially from overall category growth. Since online dating presents users with tons of potential mates at their fingertips, there's been a natural shift toward the digital solution. In fact, in 2017, roughly 40% of all heterosexual relationships in the U.S. started online. That's double the percentage from a decade prior. Additionally, as more people join Match Group's suite of apps, the appeal for the next potential user grows as well. This network effect is part of what has helped Tinder grow its paying users so consistently over the last five years.

Between all these potential growth drivers, it seems quite possible Match Group's growth in cash flow will outpace its growth in revenue. This should make the company's cash-flow multiple look much cheaper in the future.