Shares of Nvidia (NASDAQ:NVDA) jumped 8% to a record closing high of $316.75 on Thursday after the chipmaker announced blockbuster sales and profits.

CEO Jensen Huang said the company's data center business is benefiting from the growth of the cloud-computing market, as well as "broadening adoption" of its artificial intelligence technology "by more than 25,000 companies." Nvidia's chips are also helping to fuel the growth of the massive global gaming industry.

"Demand was strong across the board," Chief Financial Officer Colette Kress said during a conference call with analysts. 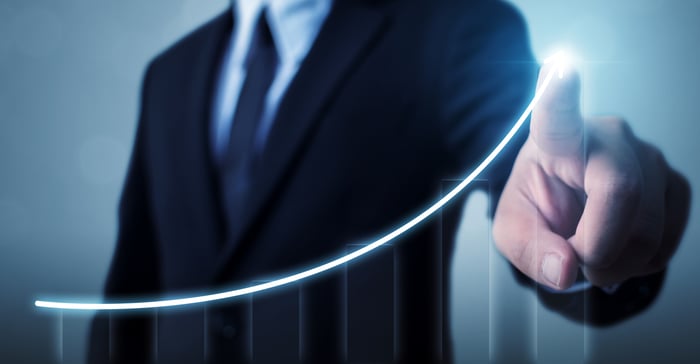 Moreover, Nvidia is becoming far more profitable as its revenue base expands. Its adjusted gross margin improved by 1.5 percentage points to 67%, and its operating expenses increased at only half the rate of its revenue growth.

Together, Nvidia's rising gross profits and operating-cost discipline drove a sharp increase in earnings. All told, the tech-leader's adjusted net income soared 62% to $3 billion, or $1.17 per share.

Management sees more good times ahead, with revenue rising by approximately 48% year over year to $7.4 billion in the fourth quarter. But what got investors even more excited was the vision Huang shared for Nvidia's Omniverse platform for generating interactive AI-powered "avatars."

"We built Omniverse Avatars to make it easy for people to integrate some amazing technology for computer vision, for speech recognition, natural language understanding, gesture recognition, facial animation and speech synthesis, recommender systems, all of that integrated into one system and running in real time," Huang said during the company's earnings call.

Avatars will essentially serve as virtual robotics applications that provide assistance in a wide range of areas. Nvidia intends to charge each Omniverse Avatar user a licensing fee of $1,000 per year. In turn, some analysts peg Nvidia's new Omniverse market opportunity at a staggering $100 billion per year.