Shares of Yatsen Holding (YSG 0.61%) were surging today after the company beat bottom-line estimates in its third-quarter earnings report, and announced a new share buyback plan. 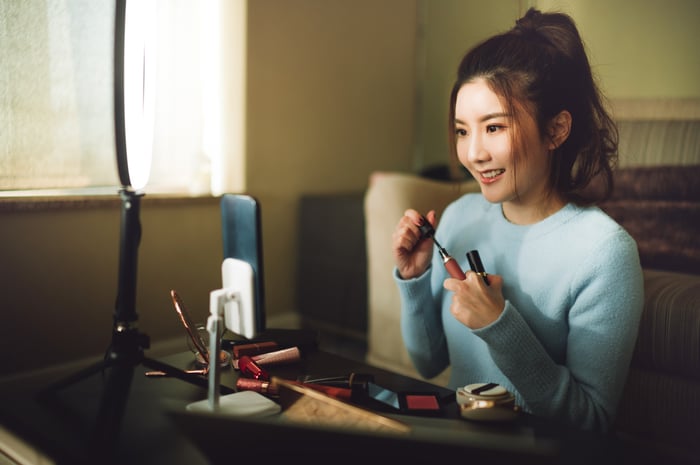 Yatsen, which owns a number of Chinese beauty brands including Perfect Diary and Abby's Choice, said that revenue in the quarter rose 6% to $208.4 million, which was short of estimates at $213.8 million.

Slow top-line growth was a reflection of ongoing pandemic headwinds, which has weighed on cosmetics sales, especially in areas like makeup and fragrances.

Gross margin in the quarter rose from 65.7% to 67.9%, primarily due to a shift in sales mix to skin care products and the premiumization of the Perfect Diary brand. On the bottom line, Yatsen's adjusted per-share loss narrowed from $0.18 to $0.05, edging out the consensus by a penny.

The company also announced a new $100 million share buyback program, which would reduce shares outstanding by 5% at today's prices if it were fully executed.

CEO Jinfeng Huang said: "Despite a challenging macroeconomic backdrop and soft industry environment for color cosmetics, our top line continued to grow in the third quarter, supported by a significant growth of our skincare brands. Looking ahead, as we embark upon the next phase of our development, we expect to continue shifting our revenue mix toward higher-quality and more profitable growth."

Yatsen's fourth-quarter guidance indicated continued headwinds with the company forecasting a decline of 15%-20% in revenue to $250 million-$260 million, which was much worse than estimates at $357.9 million, though Huang's statement indicates that investors should expect margins to improve.

Given the outlook, the Chinese stock's gains today may seem surprising but shares have already fallen by nearly 90% since their peak in February. Against that backdrop, the bottom-line improvements were encouraging, and the share buyback announcement signals that management thinks the stock is cheap.