Quest Diagnostics beat analysts' estimates in the third quarter and raised its guidance for this year again.

A sure sign of a wonderful stock is one that consistently beats analysts' forecasts. Well, Quest Diagnostics (DGX -1.83%) managed to exceed analysts' expectations in the third-quarter earnings report on Oct. 21 for the period ending Sep. 30. It marked the ninth quarter out of the past 10 that the company has topped earnings per share (EPS) predictions.

Why do I believe Quest Diagnostics is a buy for dividend growth-oriented investors? Let's take a look at three reasons. 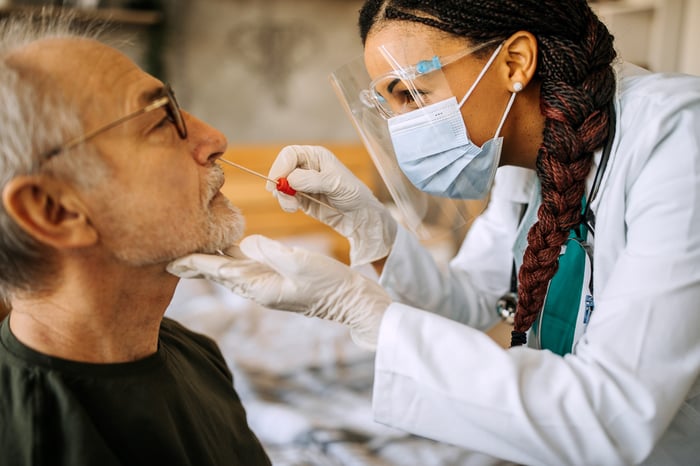 Further building on a strong 2021

The company's second-largest source of revenue, COVID-19 testing services, fell 26.5% year over year to $709 million in the third quarter due to lower testing volume. However, this decline in volume was mostly offset by the company's base businesses -- or all businesses excluding COVID-19 testing. Quest Diagnostics' combined revenue from its largest business of routine clinical testing services (i.e., labs) and third-largest business of gene-based testing services surged 15.6% to $1.9 billion thanks to volume increases.

Moving to the bottom line, Quest Diagnostics produced $3.96 in non-GAAP (adjusted) diluted EPS -- a drop of 7.9% over the year-ago period. This was driven by a 480-basis point year-over-year decline in operating income margin to 25%. But even so, this trounced analysts' EPS expectations of $2.88 by a whopping 37.5%. As a result of higher-than-expected COVID-19 testing volumes through the third quarter of the year and solid growth from the base business, Quest Diagnostics upped its guidance for this year.

The company now anticipates midpoint net revenue of $10.5 billion for this year, which would represent 11.5% growth over last year -- a meaningful bump from the previous midpoint guidance of 5.6% net revenue growth. And Quest Diagnostics also raised its non-GAAP diluted EPS guidance to a midpoint of $13.70 for this year, which would work out to 22.5% growth compared to last year. This is a massive increase compared to the previous midpoint guidance of 7.4% year-over-year growth in non-GAAP diluted EPS.

Quest Diagnostics is doing well operationally. But is the business financially strong enough to withstand a potential downturn? Let's turn to the interest coverage ratio to answer this question, which measures how many times over a company can pay its interest expenses with earnings before interest and taxes (EBIT).

Quest Diagnostics' interest coverage ratio nearly doubled from 10.1 in the first nine months of last year ($1.25 billion in EBIT/$124 million in interest costs) to 19.4 through the first nine months of this year ($2.21 billion in EBIT/$114 million in interest expenses). This means that the company's EBIT would need to plunge over 90%, its interest expenses would need to soar many times over, or a combination of the two events would need to occur before the company would be insolvent. In other words, investors need not worry about Quest Diagnostics' ability to stay in business in the years to come.

Despite Quest Diagnostics' encouraging operating fundamentals and financial position, the company's shares remain attractively priced. At its current share price of $150, the stock trades at a price to trailing-12-months free cash flow of just 10.5 times. This is well below its 13-year median price to FCF ratio of 15.3, which supports the case that the stock is trading at a discount. And you don't have to take my word for it.

Looking at Quest Diagnostics' share repurchase activity this year is yet another indication that the stock is churning out cash flow and management believes shares are cheaply priced. In the first nine months of this year, Quest Diagnostics has repurchased 12.5 million shares for $1.6 billion. This works out to nearly 9% of the stock's $18.6 billion market capitalization, which is a significant buyback program in less than a year. And with another $1.3 billion in remaining share buybacks authorized, the company will likely be retiring more shares this year, which leaves all shareholders with a bigger slice of its pie of growing revenue and profits.

The Delta Variant Has Made Quest Diagnostics Indispensable
420%