Not all cryptocurrency tokens are moving in the same direction this week.

It's been a bit of a rough week for cryptocurrency investors. One notable exception is Crypto.com Coin (CRO 1.67%), which has soared more than 30% this week as of midday Friday. That's in contrast to the downward movement of Bitcoin (BTC 1.05%), the most valuable coin, which is worth more than double Ethereum (ETH 1.85%), the next-largest token.

Crytpo.com, the coin, has now become the 17th-largest cryptocurrency, according to CoinGecko. That list can be fluid as investors jump in and out of what they deem the next hot token. But Crypto.com Coin (CRO) jumped this week for a different, and unique, reason. CRO was launched in 2018 as a product of the Crypto.com company, which was launched two years earlier. This week's token move was driven by another action taken by the company itself. 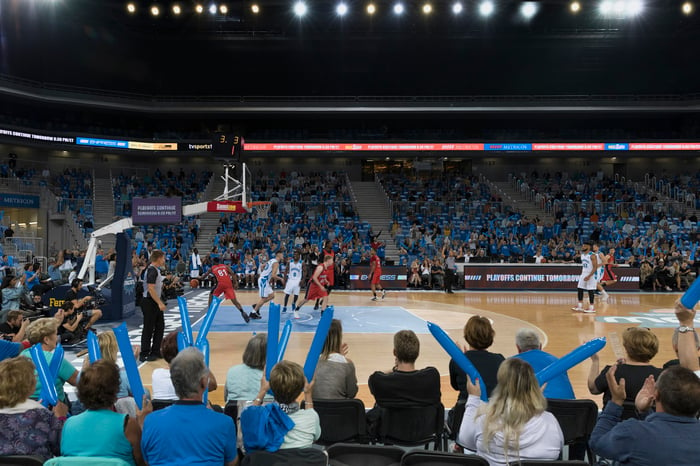 Crypto.com, the company, made a bold move this week by buying the naming rights to the Los Angeles Lakers basketball arena, currently known as the Staples Center. The company is paying $700 million to rename the arena that is also used by the WNBA's Sparks, the NBA's Clippers, and the NHL's Kings. The deal is for a 20-year contract, according to CNBC.

CRO soared on the deal, as its sponsor company now has a new relationship with Anschutz Entertainment Group (AEG), owner of the arena and surrounding entertainment complex. AEG president and CEO Dan Beckerman said in a statement, "AEG and Crypto.com ... share a vision about innovation and the future of sports and entertainment. ... We look forward to partnering with Crypto.com to create meaningful initiatives to bring that vision to life in the years to come."

The partnership brings back memories of the dot-com era of the late 1990s and early 2000s. At the height of the stock surge for internet companies, then-high-flying internet company CMGI bought the naming rights to New England's football stadium. But that deal in 2000 marked the peak of the internet bubble, and CMGI was forced to backtrack from that agreement, paving the way for the stadium to become Gillette Stadium, as it's called today.

That situation became a poster child for the dot-com era failures of many companies that were valued well beyond what traditional metrics warranted. The big question for some observers now is whether Crypto.com may be following in those footsteps, and whether the cryptocurrency wave may be cresting. There are plenty of differences between the two situations, but it's notable to see that amount of money being spent. For now, investors appear to be showing their approval by pushing the value of Crypto.com Coin higher.

Here's Why Cronos Is Soaring Today

Which Under-the-Radar Cryptos Could Pop After This Year's Big Soccer Tournament in Qatar?
409%