Tesla has been unusually quiet this week, but a flurry of news items has it back in the conversation today.

News involving Tesla (TSLA 3.94%) was unusually quiet this week in the wake of a spike in interest in the electric vehicle (EV) sector after Rivian's initial public offering (IPO) last week. But Tesla shares have quietly gained another 10% this week, with a good portion of that coming Friday. Tesla's stock closed the day 3.71% higher today.

Today's bounce comes amid mixed news related to Tesla. Closely followed tech sector investor Cathie Wood said that Tesla could hold a 20% to 25% share of the U.S. automotive market in five years, in an interview with Barron's this week. 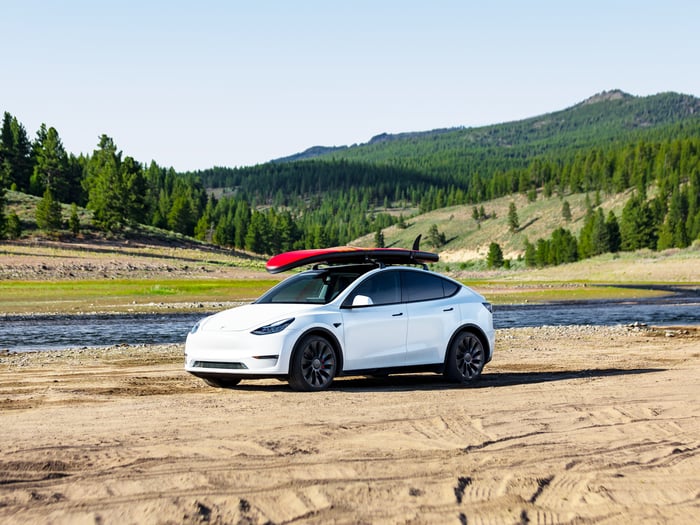 Separately, Tesla's vehicles got mixed reviews from the Consumer Reports Auto Reliability Report. And a lawsuit filed against the company was reported today by Reuters, alleging harassment at the company's factory in California. But the overall EV sector has generally been on the move higher this week with excitement generated by Tesla competitor Rivian going public and Tesla shares participating in those gains.

The Consumer Reports (CR) results were released yesterday, with Tesla's Model S, X, and Y receiving low scores, as reported by CNBC. But the Model 3 was listed near the middle of the pack and was still a CR recommendation, according to the report. Many of the overall reliability issues included in the survey came from "high tech bells and whistles" rather than drivetrain issues, according to a CR representative. And investors didn't appear to put much stock in Tesla's results from the survey.

While the new lawsuit has made news today, Tesla hasn't yet responded to requests for comment, according to Reuters. The main driver for Tesla's stock today seems to be the overall EV sector backdrop. It also didn't hurt that highly regarded analyst Dan Ives with Wedbush raised that firm's price target for the stock to $1,400 per share, matching the top price of analysts who follow the company. Bloomberg quoted Ives saying, "The Street is continuing to digest the massive transformation coming to the auto industry around the electric-vehicle revolution," and he expects Tesla to lead the way. While Rivian made a splash with its well-received IPO, many investors seem to be buying Tesla rather than what some hope may be the next Tesla.