On Nov. 8, CorePoint Lodging (NYSE:CPLG) announced that it had agreed to be acquired. But there was a little bit of an unusual twist here. This is what you need to know about the deal, why shareholders might get another small payout, and why that still won't "make you whole." In the end, however, the bigger issue for investors is what this deal could mean for the larger hotel real estate investment trust (REIT) sector.

The basics of the deal

Affiliates of Highgate and Cerberus Capital Management are partnering up to buy CorePoint Lodging for $1.5 billion. It is an all-cash deal that will end up paying CorePoint investors $15.65 per share. With the stock currently trading $0.10 to $0.15 lower than that, investors have to decide whether they want to sell and move on to a new investment or stick around and collect the dime or so of extra cash. Only, it's not that easy. 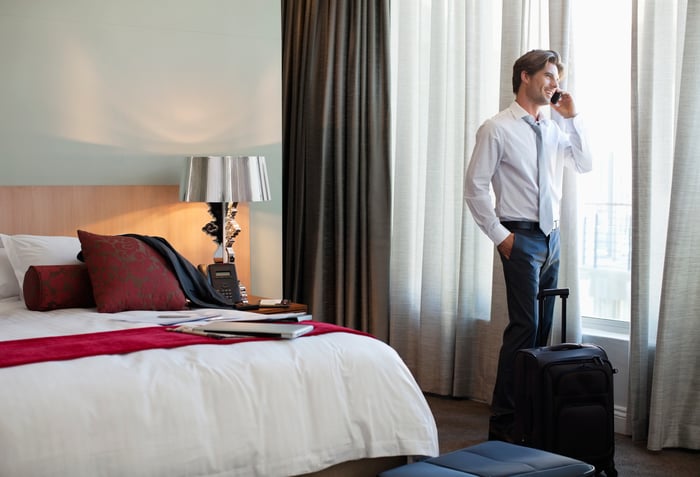 There is the normal discount that appears to be in CorePoint's price because of the risk that the deal will fall apart before it's consummated. But there's also another $0.10 per share that might get kicked out if there's a positive outcome from a tax issue the company is wrangling. So now, there's maybe $0.25 per share to contend with. Together, those two facts only amount to around 1% or so of additional upside, so conservative types would probably be better off taking the money and "running."

Bigger issues for the industry

That last bit is actually telling, since in the end, this was really a "take under" rather than a "takeover," which is a Wall Street saying for when a company is bought for less than its prevailing stock price. Normally there's a premium that gets paid.

The interesting thing is that CorePoint has been liquidating itself slowly for a number of years by selling off assets that it viewed as noncore. These aren't small numbers, either, with the company selling 210 hotels over the past three years or so. CorePoint used much of the cash to pay down debt.

To be fair, in some ways, CorePoint was a poorly positioned hotel landlord trying to get itself back on track. In the end, the easiest way to do that was to go private to avoid the public scrutiny that comes with quarterly earnings. However, if CorePoint was bought for around 10% less than it was trading the day before the deal was announced, perhaps other hotel operators are similarly overpriced in the market.

Indeed, CorePoint is hardly alone in being a heavily leveraged hotel owner still trying to muddle through the aftermath of a global health scare. For example, Ashford Hospitality Trust (NYSE:AHT) and Hersha Hospitality Trust (NYSE:HT) both have higher debt to earnings before interest, taxes, depreciation, and amortization (EBITDA) ratios than CorePoint. Given the situation with CorePoint, perhaps investors in names like these need to take a second look at what they own. 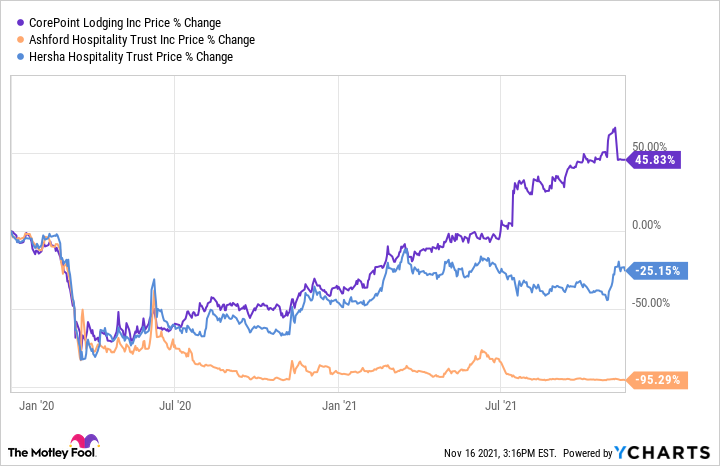 Hersha's stock has recovered nicely from the depths of the early 2020 bear market and is now around 25% below where it started that year. Has the rebound been too strong? Ashford hasn't been nearly as lucky, having gotten caught up in the meme stock craze. After some volatile ups and downs, it is now 95% below where it started in 2020. Even that may be too generous.

Regardless of where you come out on these two hotel REITs, if you own them or any of their peers, you should rethink your hypothesis to make sure it still holds, given the numbers in the CorePoint acquisition.

If you own CorePoint, there's not much to do from here -- the deal is done. If you've owned it because you expected a hotel recovery, well, it's probably time to sell and move on to an entirely different trading idea. The extra cash you might get from sticking around probably isn't worth it. If you own a different hotel REIT, make sure you really understand what it owns and have a strong conviction about what it's worth. Based on the "take under" of CorePoint, your expectations could be too high.