Dropbox (NASDAQ:DBX) has been a huge disappointment for shareholders since going public in 2018. Since its initial public offering (IPO) in 2018, the stock is down over 10%, while the S&P 500 index is up almost 74% in that time period. After reporting its third-quarter results on Nov. 4, Dropbox's stock has taken quite the tumble and is now down 15% in the past month.

Returns for Dropbox shareholders have been lackluster. However, the business is actually doing quite well right now, providing a buying opportunity for long-term investors. Here are a few reasons why value investors should buy Dropbox stock right now. 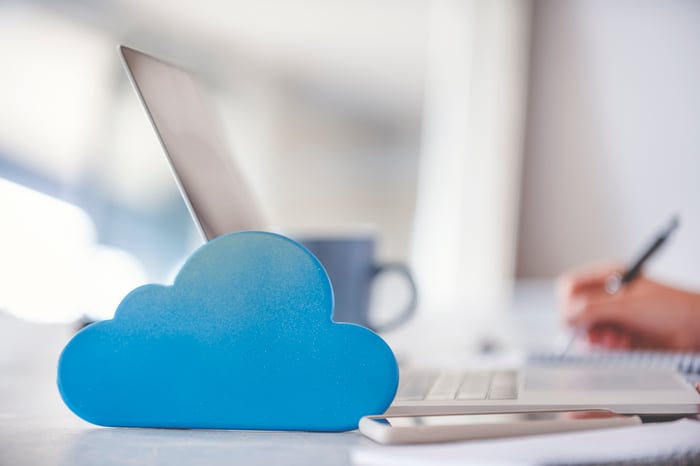 In Q3, Dropbox once again grew its revenue and user base. Total revenue was $550.2 million in the period, up 12.9% year over year, and annual recurring revenue (ARR) was $2.2 billion, up 12% year over year. Since Dropbox is mainly a subscription business where customers sign annual or monthly plans, ARR is a great measure of the company's top-line health.

This solid growth came from an increase in paying users, from 15.3 million a year ago to 16.5 million today, and growth in average revenue per user (ARPU) from $128.0 to $133.8. This expansion isn't a fluke, either. Since 2019, when Dropbox revamped its product organization and expanded from just file storage, revenue per share has consistently grown. With a large market opportunity ahead as it tries to convert the 500 million+ users of free Dropbox tools into paying subscribers, this trend is likely to continue in the future. 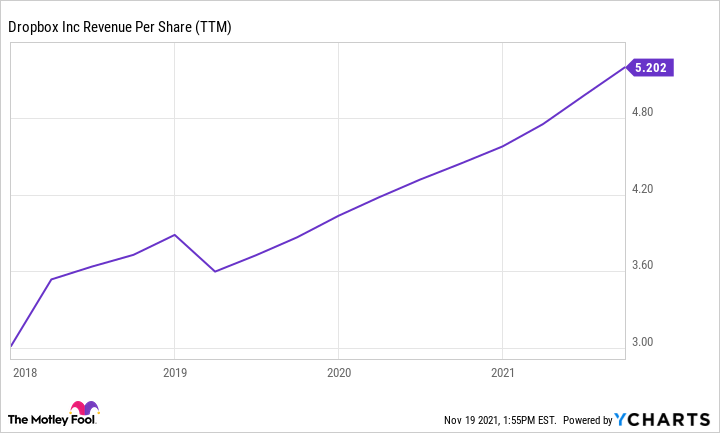 Unlike a lot of technology companies, Dropbox is actually profitable. The key metric to follow is free cash flow, which is the excess cash a business generates after making its capital expenditures. In 2021, Dropbox is expecting to generate $715 million in free cash flow, up substantially from the $491 million it brought in last year.

What is Dropbox doing with all this cash? Returning it to shareholders through share repurchases, which has reduced Dropbox's share count from approximately 420 million two years ago down to 382 million today. This is beneficial to existing shareholders as it increases their percentage-based ownership of Dropbox and the free cash flow its business generates per share they own. 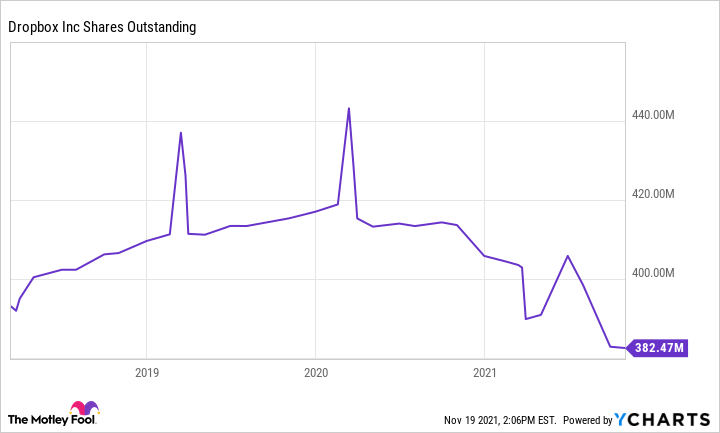 Dropbox isn't sitting on its heels. Management thinks there are still plenty of products it can add to the core workflow and file sharing platform. These include recent product launches like a video collaboration tool called Replay, a visual communication tool called Capture, and a shopping feature called Shop.

None of these products are game-changers for Dropbox, but will hopefully add to the value proposition of a Dropbox subscription. Investors can see this play out in growth in ARPU and a reduction in churn, which management said occurred in Q3. Lastly, Dropbox recently announced the acquisition of Command E, a desktop search tool that could be a nice integration into the Dropbox platform.

With durable growth, strong profitability, and more and more products coming out, it is a surprise to see Dropbox's market cap sitting at only $9.6 billion. If the company can hit its $715 million free cash flow target for this year, that would give the stock a price-to-free cash flow (P/FCF) of 13.4. Or, in other terms, investors in Dropbox are yielding approximately 7.5% in cash per year (called free cash flow yield) by buying shares of Dropbox right now.

If Dropbox can continue growing its users and ARPU, this free cash flow number should continue to climb over the next few years. Eventually, Dropbox's stock should follow suit.