Shares of Chinese medical aesthetic-services company So-Young International (NASDAQ:SY) climbed more than 12% on Monday. The stock, which closed at $4.32 on Friday, opened at $4.91 a share on Monday. And while it never got above that, it stayed much higher than it had been before the weekend. The stock is still down more than 56% for the year and is closer to its 52-week low of $3.86 than its 52-week high of $17.14. 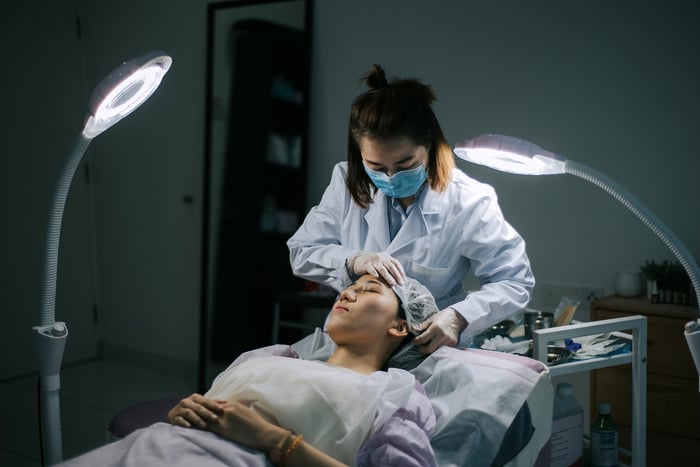 On a day when nearly every other publicly traded Chinese company was falling in U.S. markets, So-Young's shares rose because of a buyout offer. The company reported that its co-founder and CEO, Xing Jin, had sent the board of directors a preliminary nonbinding proposal letter to acquire all of the outstanding Class A ordinary shares of the company for $5.30 per share. Obviously, considering its current share price, this could be good news for investors if the board signs off on the proposed buyout.

The company is also coming off a generally positive third-quarter report that it presented, unaudited, on Friday. According to the report, the company had third-quarter revenue of $67 million, up 20% year over year, and net income of $1.1 million, up 650% over the same period a year ago. Through nine months, the company reported $192.9 million in revenue compared to $136.6 million a year ago and net income of $2.5 million, compared to a loss of $5.1 million in the same period in 2020.

The company has three segments: content and its distribution through social media networks and targeted media platforms in China, a social community based on user-generated content, and an online reservation services platform for medial aesthetic treatment. Investors have plenty of reasons to worry about any Chinese stocks these days, thanks to the country's economic problems and recent crackdowns on publicly traded companies by Chinese regulators.

The latest move came over the weekend when regulators issued new fines regarding antitrust violations. Though none of the fines appear to be against So-Young, it's easy to say that buying its stock at this point is risky, especially since it is still presenting unaudited earnings statements.

Over the past year, Chinese stocks have lost much of their value. For example, the Chinese stock ETF iShares MSCI China (NASDAQ:MCHI) is down more than 15% for the year while other Chinese companies such as Alibaba Group Holding (NYSE:BABA) and Tencent Holdings (OTC:TCEHY), are down more than 41% and 15%, respectively.