Investors seem to be listening to the advice of a TV personality more than they are a Wall Street analyst.

Shares of Moderna (MRNA -1.76%) were slipping 2.7% lower as of 11:27 a.m. ET on Tuesday after falling as much as 4.8% earlier in the morning. This decline came despite Morgan Stanley analyst Matthew Harrison stating today that Moderna's shares could jump between 10% and 20% with positive early data for its experimental flu vaccine.

So why did the vaccine stock fall instead of jump? It's probably because more investors are paying attention to CNBC's Jim Cramer instead of Morgan Stanley's Harrison. Cramer stated on the CNBC show Mad Money on Monday: "Moderna is very hard for me. It's just a hold here. Got to go back to where it was." 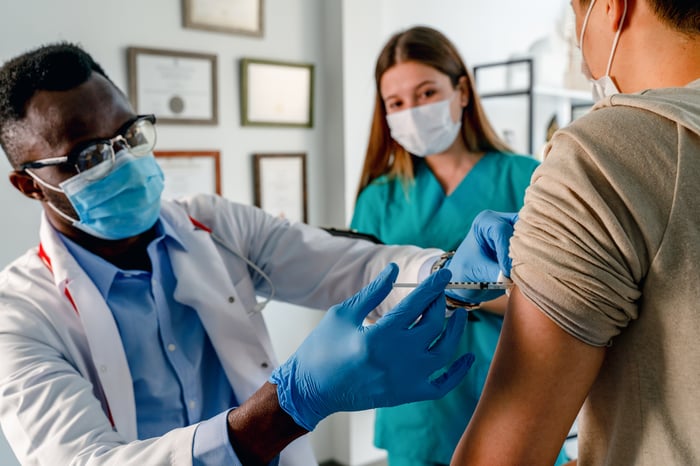 What should investors believe with two different perspectives on Moderna? Perhaps a little of both.

The company should soon report results from its phase 1 study of flu vaccine candidate mRNA-1010. Since it is already preparing for a phase 2 study, it seems likely that the data will be positive, as Harrison expects.

Maybe Harrison will prove to be right that Moderna's shares will rally up to 20% higher on good news for its experimental flu vaccine. But Cramer's caution on the stock could still be warranted.

Moderna's fortunes over the next few years hinge on its COVID-19 vaccine SpikeVax. There's still no guarantee that SpikeVax's sales will be anywhere close to current levels after 2023. Positive phase 1 results for mRNA-1010 would be great, but probably not enough to justify tacking on another $11 billion or more to the company's market cap.

Investors will certainly want to pay attention to Moderna's forthcoming phase 1 results for mRNA-1010. But the more important thing to watch is the company's success in securing supply deals for SpikeVax for 2022 and beyond.