The Chinese EV makers are growing quickly as the market continues to expand.

Shares of Chinese EV makers popped in early trading Tuesday. The excitement was due to the latest earnings report from fast-growing XPeng (XPEV -6.27%), which came after shares of competitor Nio (NIO -5.43%) soared yesterday.

Shares of XPeng jumped nearly 14% in early trading after investors got a look at its third-quarter report. Nio shares, which had soared 6.5% yesterday, also gained another 4% early in Tuesday's session. As of 11:40 a.m. ET, those gains had sagged, but Xpeng shares remained 7.2% higher, while those of Nio came back to breakeven.

It wasn't just that XPeng tripled its deliveries in the third quarter versus the year-ago period. Its gross margin soared both sequentially and year over year to 14.4%. That represented a jump of 250 basis points above its second-quarter 2021 performance. And investors liked what they have to look forward to from both companies, as well. 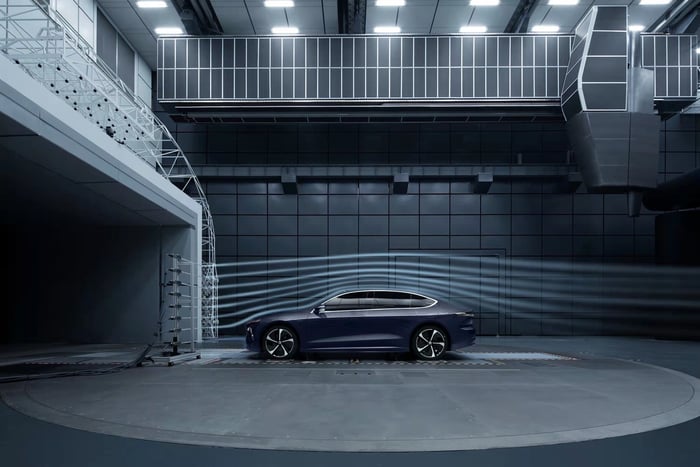 Nio's ET7 electric sedan is on track to be available early next year. Image source: Nio.

The majority of XPeng's third-quarter sales came from its P7 smart-electric sedan. And that's also good news for Nio, as its first sedan offering, the luxury ET7, is on pace to be available to customers in early 2022. Both companies are battling to become the technology leader in China's EV market.

Nio has already said it plans to release two other new products next year in addition to the ET7. And it also plans to be exporting the ET7 to both Norway and Germany by the end of 2022. But XPeng also brought up a new product in today's report.

The company touted its upcoming Navigation Guided Pilot (NGP) that it says will be able to withstand "complex city driving scenarios." And it believes this advantage will allow XPeng to enter the autonomous-driving market in the future for use in robotaxis.

Neither Chinese EV maker is sitting still as growth in the region and globally continues to grow. The market is huge, and investors are watching as the leaders in China battle for the future.