In 2021, companies that focus on small and medium-sized businesses (SMBs) have seen drastic success. DigitalOcean stock, for example, has risen over 148% year to date. Another company that focuses on SMBs has seen similar results. Bill.com (BILL -26.05%) is up over 98%.

Bill.com simplifies complex back-end accounting for SMBs, focusing on their accounts payable and accounts receivable. With the goal of helping "millions of businesses around the world manage their financial operations," is this company worth your money today? 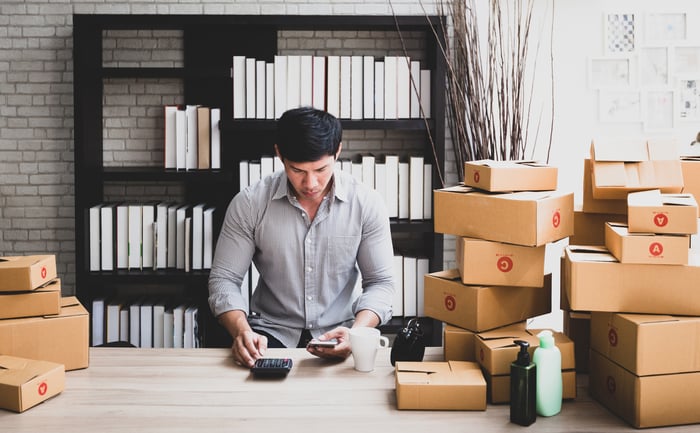 Bill.com hopes to become the leading back-end accounting solution for SMBs, and its artificial intelligence (AI) is helping the company get there. The company's AI automates and speeds up the time it takes to pay bills and get paid. The company does more than manage accounts receivable and payable, however. It also operates in the expense management and payments space.

Bill.com faces intense competition from other companies. Blackline, for example, does something very similar for enterprises. The company also faces pressure from smaller, niche providers that focus on specific segments of what Bill.com does. However, Bill.com has a key competitive advantage: its partnerships.

The company is partnered with top U.S. banks, along with key accounting software providers. The partnerships with accounting software companies like Intuit make Bill.com more appealing to consumers, because after an SMB makes a payment on Bill.com, it is easy to go to their books and update them. As for its bank partnerships, these enable Bill.com to have some of the fastest payment processes in the market.

Bill.com's strategy has been largely successful. In the company's first quarter of 2022 -- the three months that ended Sept. 30, 2021 -- it reported 78% organic core revenue growth and inorganic growth of 164%. During this fiscal quarter, the company acquired both Invoice2go (a mobile accounts receivable software platform) and the expense card company Divvy, and revenue from these companies counts toward inorganic growth. The majority of the company's revenue comes from subscription and transaction fees, and this core revenue reached $116 million for the quarter. In the company's recent quarter, $47 billion in volume was processed on Bill.com, jumping 63% year over year.

The downside to all this growth is that the company is losing a lot of money. The company's Q1 net loss was $75 million -- or 87% of gross profit, which was driven by operating expenses more than tripling year over year. The company is also burning $25 million in free cash flow. The problem with all of this is that it is getting worse year over year. Its free cash flow burn jumped nearly 200%, and its net loss grew 480%, which are both faster than the 152% total revenue growth.

So is Bill.com worth it?

This company's growth has been very impressive, and although the company is growing partially by acquisitions, its organic growth is still very strong. Even after this impressive success, the company sees a long runway ahead of itself. The company sees over 6 million potential customers and a payment volume of $25 trillion in the U.S. alone, both trumping the company's current figures. Needless to say, the opportunity for Bill.com is massive.

The company trades at 84 times sales -- a valuation that is high for any investor. However, this company has a huge potential ahead, and its robust partnerships with banks and accounting firms represent a strong competitive advantage. Considering that the company has the ability to hold onto SMBs -- which are known to churn faster than normal -- and increase their spending on the platform, it shows me that Bill.com is a necessity for its customers.

While I like a lot of things about this company, I'm still hesitant to buy it today. Its high competition is concerning, and its worsening net loss and negative free cash flow are also worrisome. The stock is very appealing, but at an astronomical valuation, it has to be the best of the best, and I don't currently see it that way. If the company can turn around its net loss or become free-cash-flow positive, I would become much more interested in the company and potentially dip a toe in, but until then, I will be watching from afar.