The pandemic-era darling continues to lose its momentum.

Zoom Video Communications' (ZM -6.27%) stock has declined about 40% over the past 12 months as investors fretted over its post-pandemic slowdown. That sell-off continued after its third-quarter report on Nov. 22.

However, Zoom's growth continues to decelerate, and its guidance indicates that the slowdown will continue. Let's take a closer look at Zoom's growth rates, outlook, and valuations to see if it's still a worthy investment. 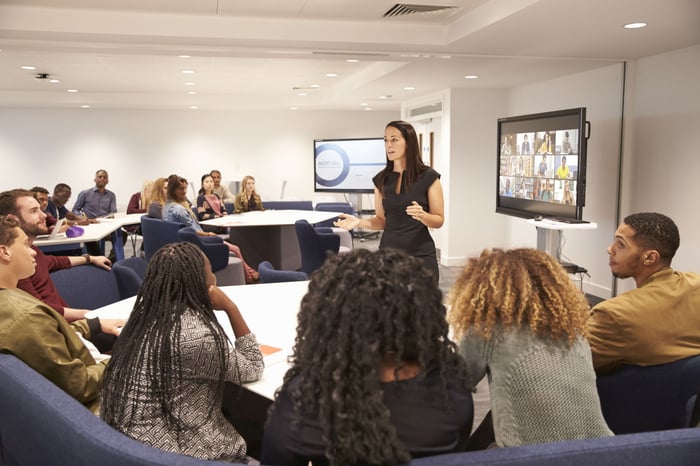 Zoom was already generating robust growth back in fiscal 2020, which ended in January of that year, before the pandemic hit. It had been disrupting legacy video-conferencing platforms -- like Cisco's Webex and Microsoft's (MSFT -0.31%) Skype -- with its streamlined interface, easy-to-use features, and catchy brand.

When the pandemic forced more people to attend classes and work remotely, its growth accelerated to breakneck levels in fiscal 2021. However, those tailwinds waned throughout fiscal 2022 as vaccination rates rose and more people physically returned to classrooms and offices:

Zoom expects its revenue to rise 19% year over year in the fourth quarter and grow 54% for the full year. Both of those forecasts surpassed analysts' expectations and indicated the company could still generate impressive double-digit growth on top of its triple-digit growth last year.

Will Zoom continue to grow?

Zoom didn't provide a forecast for fiscal 2023, but analysts had expected its revenue to rise 52% this year and grow 18% next year. Those estimates will likely be raised after its latest report, but they still imply the company will face increasingly difficult year-over-year comparisons as the pandemic ends.

Zoom also faces tougher competition in that slowing market. Microsoft's Teams, which has largely replaced Skype, is becoming a growing threat to both Zoom and Salesforce's (CRM -0.96%) Slack in the enterprise-communications space. Last quarter, Microsoft said 138 organizations had more than 100,000 Teams users, and more than 3,000 organizations had over 10,000 Teams users.

But Microsoft isn't killing Zoom yet. Zoom ended its third quarter with 2,507 larger customers that generated over $100,000 in revenues over the past 12 months -- up 94% from a year ago.

However, Zoom is still aware that it needs to expand its ecosystem beyond video calls to stay competitive. That's why it tried to buy the cloud-communications provider Five9 (FIVN -1.64%) for $14.7 billion earlier this year. The deal was called off in September, but Zoom is still working closely with Five9 to expand its cloud-communications capabilities.

Zoom also recently started testing out post-video ads for its free users. Those ads might enable Zoom to monetize the tens of millions of free, loss-leading users that it gained throughout the pandemic and stabilize its revenue growth, even as it gains fewer new users.

What about Zoom's profitability and valuations?

Unlike many other high-growth tech companies, Zoom is consistently profitable by both generally accepted accounting principles (GAAP) and non-GAAP metrics. That's because it only spends a conservative amount of its revenue (10% in the first nine months of fiscal 2022) on stock-based compensation expenses. By comparison, Five9 -- which is unprofitable on a GAAP basis -- spent 17% of its revenue on stock-based compensation expenses in the first nine months of fiscal 2021.

However, Zoom's stock still isn't cheap at 52 times forward earnings and 15 times next year's sales. Those valuations would be reasonable if Zoom's growth rates were more predictable, but they're simply too hot for a company in the midst of an ongoing slowdown.

For example, investors who are looking for a diversified cloud giant that will benefit from the same secular tailwinds as Zoom can simply stick with Salesforce, which aims to more than double its annual revenues to $50 billion by fiscal 2026. Salesforce's stock trades at 66 times forward earnings and just nine times next year's sales.

Zoom is still a "show me" stock

I own some shares of Zoom, but I don't think it's the right time to double down on this polarizing stock yet. Zoom has an attractive brand and a sticky platform, but it's unclear if it can continue generating double-digit sales growth as the pandemic ends and Microsoft aggressively expands Teams.

Instead, I'd monitor Zoom's growth over the next few quarters to see if its year-over-year growth stabilizes before buying any more shares.

Zoom Stock Is Getting Hit With a Double Whammy