Wall Street analysts set stock price targets and provide detailed insights on companies. However, their views are often short-sighted, capped by what they can put into their models. As a result, they can struggle analyzing growth-oriented companies.

Still, analysts' views are respected by many investors, and rating changes can create short-term price movements. This recently happened to Crowdstrike (NASDAQ:CRWD) after Morgan Stanley initiated coverage at underweight, sending shares tumbling more than 10%. Should investors heed the analyst's warnings or buy this top cybersecurity play? 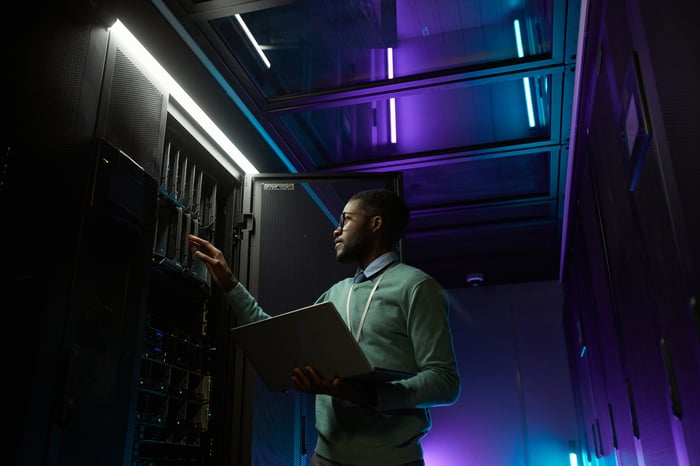 Founded out of a legacy cybersecurity provider

Crowdstrike provides cloud-native endpoint security software. Co-founder and CEO George Kurtz used to work at McAfee before leaving to launch Crowdstrike when he realized a new company was needed to provide security solutions for the cloud environment. The move paid off as Crowdstrike is now among the leading names in cybersecurity.

With a wide variety of offerings, Crowdstrike is a one-stop shop for handling cybersecurity needs. The most recognizable use is endpoint security, similar to antivirus software installed on many computers. Using machine learning, the company gathers information from attacks occurring on all of its customer devices, better protecting everyone. In the Morgan Stanley coverage, the analyst specifically mentioned SentinelOne as a potential threat. However, Crowdstrike argues SentinelOne's offering doesn't scale well to enterprise size and misses 80% of threats due to lacking an identity-protection solution.

All of Crowdstrike's modules build on each other, creating a more robust offering. And customers tend to expand their partnership with Crowdstrike, which further locks them into business with the company.

Crowdstrike is rapidly expanding its subscription customer base and reported 81% year-over-year growth during its fiscal second quarter ended July 31. Its net retention rate was just under 125% as customers increased their spending with Crowdstrike significantly. Additionally, the number of customers who deploy four or more Crowdstrike modules increased from 57% last year to 66% in the latest quarter. Its base Falcon program has also received stellar reviews from users -- Gartner's peer insights has given it 4.9 stars out of five with over 761 reviews (and no one or two star ratings). Rarely does any offering have raving reviews with no detractors.

Unsurprisingly, revenue is growing quickly. Subscription revenue grew 84% and made up 92% of the total in fiscal 2021. Although it only has annual recurring revenue of $1.34 billion, it believes the total market opportunity will expand to $106 billion by 2025.

Looking forward, Crowdstrike is projecting 60% revenue growth in the current year and non-GAAP net income per share of $0.46. As Crowdstrike continues adding more customers and expands with existing ones, it will scale, pushing it closer to its target of a 30% free-cash-flow margin.

Cybersecurity is a huge opportunity, and strong competitors are vying for contracts. Microsoft, VMware's Carbon Black, SentinelOne, and Palo Alto Networks are all listed by Crowdstrike as competitors. However, Crowdstrike's offering is a more effective and comprehensive security solution than alternatives that piece together products from many different suppliers. In the Morgan Stanley report, the analyst noted Crowdstrike's software is 15% to 20% more expensive than its competitors. This could potentially cause price-sensitive customers to turn to other offerings.

SentinelOne is a young public company, and as you can see below, it still has a long ways to catch up to Crowdstrike.

SentinelOne is attempting to close the gap by spending twice as much as what it generates in revenue. This is unsustainable and must be remedied eventually. Crowdstrike also has superior gross margins, giving it more room to channel capital to departments as needed.

Crowdstrike is down more than 20% from its all-time high; yet it is the top endpoint cybersecurity company. Investors should be willing to pay a premium for great businesses. Ignore the short-term price targets some analysts set and use the current discount as a buying opportunity.