Don't forget about Novavax (NASDAQ:NVAX). It could be easy for investors to do so. The company's COVID-19 vaccine still isn't authorized in any major market. Its shares are more than 30% below the high set early this year and remain 20% lower than where they traded just three months ago.

But I think the chances are very good that Novavax is poised to soon take off. Here's why Novavax stock could skyrocket in December. 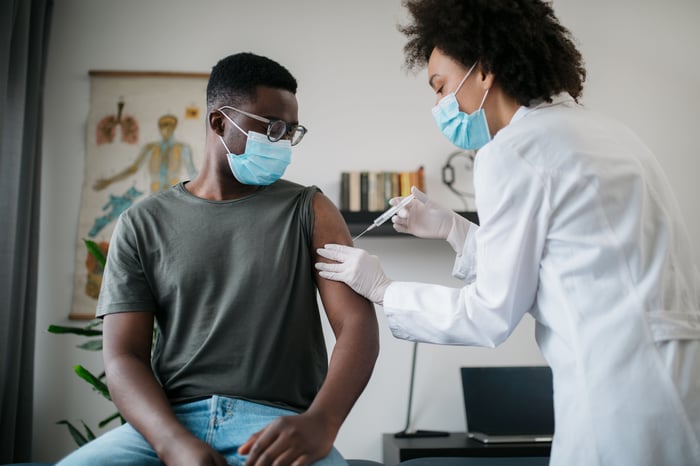 The World Health Organization (WHO) added the omicron variant to its list of variants of concern last week. That move rattled the stock market. However, it also lit a fire beneath vaccine stocks, including Novavax.

Why worry about the omicron variant? There's a possibility that the high number of mutations in the spike protein with this variant could make the coronavirus strain more contagious than ever.

But every problem presents an opportunity. In this case, there could be increased demand for vaccines that are effective against the omicron variant. Novavax has already revealed that it's developing a version of its COVID-19 vaccine that specifically targets the variant.

Investors shouldn't get the cart ahead of the horse, though. The concerns about the omicron variant could be premature. However, there's likely to be some uncertainty for a few weeks. Interest in vaccine stocks will likely increase during this period. That's good news for Novavax.

I suggested that it was time to buy Novavax after the company's third-quarter update in early November. That was well before anyone had heard of the omicron variant. All of the reasons why I was bullish about the stock then are still in place. Most importantly, Novavax has multiple potential catalysts on the way.

Novavax has now filed for authorizations or approvals in Australia, Canada, the European Union, New Zealand, Singapore, and the United Kingdom for COVID-19 vaccine NVX-CoV2373. It's submitted for Emergency Use Listing with the WHO. In addition, the company and its partner, SK bioscience, have filed for approval of the vaccine in South Korea.

There's no guarantee that any decisions will be reached in December. However, it's possible that Novavax will add more regulatory nods this month on top of its Emergency Use Authorization (EUA) wins in Indonesia and the Philippines. The European Medicines Agency stated that a marketing authorization "could be issued within weeks" after receiving Novavax's application on Nov. 17.

Novavax also expects to file for U.S. EUA for NVX-CoV2373 by the end of the year. This submission could provide a spark for the stock on its own.

Momentum into the new year?

The consensus 12-month price target for Novavax reflects a premium of nearly 20% to the current share price. But I think that analysts could be too pessimistic about Novavax's prospects.

For one thing, a 20% jump would still leave Novavax's valuation well below other vaccine stocks based on price-to-forward sales multiples. More importantly, though, Novavax has a headstart over rivals in developing a combination flu-COVID vaccine.

To be sure, there are potential scenarios where Novavax doesn't move significantly higher. The company could again delay its U.S. EUA filing. It could receive a thumbs-down from regulators in other countries.

I don't look for these scenarios to unfold, though. My view is that Novavax stock could soar in December with positive regulatory developments. I also expect that the momentum will extend into the new year.