It's been a big year for Tesla (NASDAQ:TSLA). The stock has surged nearly 60% higher year to date -- and that's on top of the growth stock's 743% gain last year. Investors have cheered the company's soaring profits, fueled by strong sales growth and margin expansion.

Here's why Tesla could grow its deliveries around 50% next year. 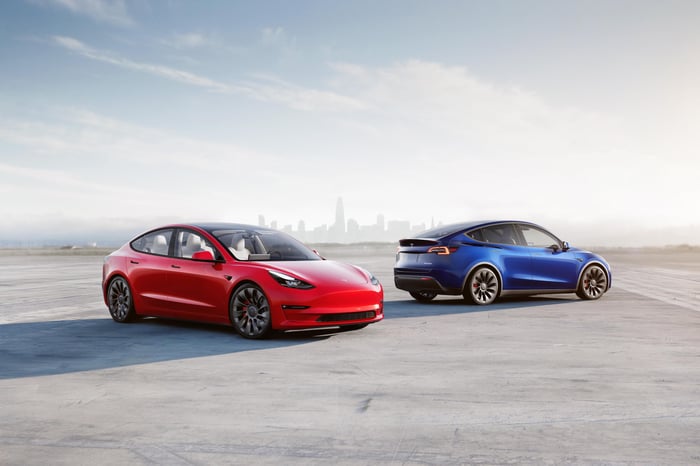 Wrapping up 2021 with significant momentum

A look at Tesla's sales growth in recent quarters quickly shows that a forecast for 50% growth in the electric-car maker's deliveries next year isn't actually very bold. Consider that in the second and third quarter of 2021, Tesla's deliveries increased 121% and 73% year over year, respectively. While Tesla's fourth-quarter deliveries are yet to be determined, simply maintaining third-quarter deliveries of about 241,000 would translate to about 34% growth. But 34% growth in Q4 is likely too conservative of an estimate for Q4, as Tesla management recently said the company achieved an annualized production run rate of over one million cars toward the end of Q3. Achieving this suggests that deliveries as high as 250,000 could be achieved during the quarter.

Strong sales momentum in Tesla's third quarter -- and likely in Q4, too -- sets the company up well for continued strong year-over-year growth rates in early 2022.

Another positive thing Tesla has going for it is extremely high levels of demand. Management indicated in the company's third-quarter earnings call that demand continues to exceed supply. Further, the company said in its third-quarter update that it believes there's a "structural shift" happening in which demand for electric vehicles is increasing. "We believe the more vehicles we have on the road, the more Tesla owners are able to spread the word about the benefits of EVs," Tesla said.

With no sign of demand slowing, the company's continued growth next year is highly dependent on Tesla's ability to increase vehicle production rates. Fortunately, Tesla has two new factories it has been building out all year that are supposed to begin producing the automaker's high-volume Model Y vehicle before the end of the year. In fact, the start of production at Tesla's new factory in Berlin, Germany, could be just days away. Tesla is also almost ready to begin production at a new factory in Austin, Texas.

COVID, of course, has thrown some major curveballs at companies with sprawling global supply chains and high levels of dependence on trucking companies and human labor for product distribution. The lessons of 2020 and 2021 suggest that investors should brace themselves for the unknown in 2022 as well. Supply chain disruptions or other unexpected challenges could always make things difficult for Tesla next year, weighing on sales. Nevertheless, even considering these potential challenges, 50% growth in vehicle deliveries seems possible for the electric-car maker next year. And if Tesla doesn't quite achieve this, actual results may not be far off from this mark.