Membership retailer Costco (NASDAQ:COST) reports fiscal 2022 first-quarter results on Dec. 9. Since the onset of the pandemic, the company has added millions of new customers.

The retailer requires folks to pay for annual memberships that grant the privilege to shop at its warehouse stores. Impressively, Costco offers enough good deals to make the membership worthwhile for over 60 million households. When the company reports Q1 earnings, membership totals will take center stage in investors' minds. 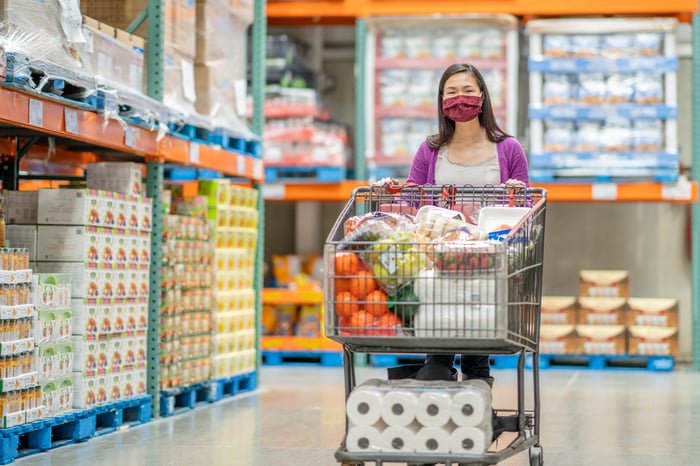 Members are critical to Costco's growth

As of its fiscal fourth quarter, which ended Aug. 29, Costco boasted 61.7 million paying membership households. That was up by 1.1 million from just 16 weeks earlier. It offers two membership tiers -- standard and executive.

The standard membership runs $60 for the year and gives households access to shop inside Costco warehouses. The executive membership costs $120 per year, and in addition to shopping privileges, gives customers 2% cash back on purchases at Costco.

Therein lies one of the reasons investors will be so focused on membership totals when Costco reports Q1 earnings -- members are vital to company profits.

There is another critical factor investors will be looking out for when it reports earnings on Dec. 9. Costco has historically increased membership prices roughly every five years, and the last time the company raised prices was in 2017, so that time is approaching. Management might announce when the next price increase will be or discuss its thought process around the decision.

Costco reported North American membership retention rates of 91.3% in its most recent quarter. If a similar percentage of members renew their subscriptions at a higher price, that will boost operating profits meaningfully.

Can Costco's stock go even higher?

Analysts on Wall Street expect Costco to report revenue of $49 billion in Q1 and earnings per share (EPS) of $2.61. If the company hits the EPS estimate, it would be a 13.4% increase from the same quarter last year.

That growth rate in EPS would be right in line with its compound annual growth rate in the metric over the last decade of 13.1%. Costco's unique business model of providing customers an excellent value in exchange for a yearly membership fee works well for the retailer. As a result, Costco's stock is working well for shareholders -- it's up 46% year to date. If the company reports an increase in the rate of membership growth in Q1 or a membership price increase, it could send the stock higher still.