DiDi Global (NYSE:DIDI), China's largest ride hailing company, went public five months ago at $14 per share. Today, it trades at less than $8. Its decline was caused by an abrupt government crackdown shortly after its public debut. However, some contrarian investors might still consider DiDi a deep value play at just over one times this year's sales.

After all, Uber (NYSE:UBER) -- which sold its Chinese business to DiDi five years ago -- trades at four times this year's sales. But will DiDi's regulatory challenges ever end? Or is this battered stock doomed to be delisted? 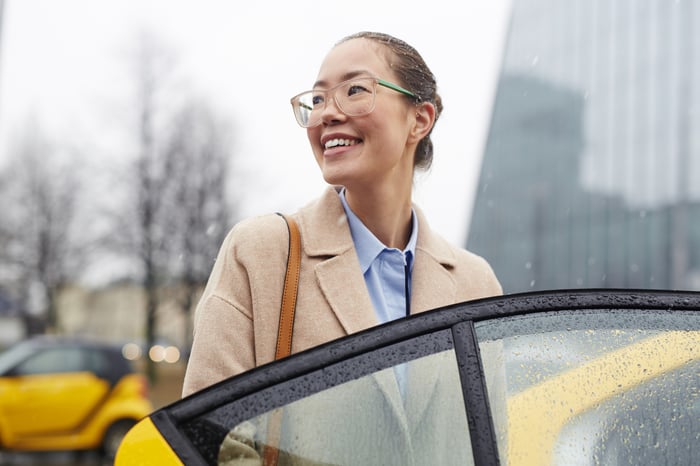 How fast was DiDi growing?

In 2020, DiDi generated 94% of its revenue from its Chinese mobility services segment, which provides its ride-hailing and ride-sharing services.

DiDi posted net losses in 2019 and 2020, but it generated a net profit in the first quarter of 2021. Those improving fundamentals seemingly made it a more compelling investment than Uber, which is expected to remain unprofitable for the foreseeable future.

Analysts had expected DiDi's revenue to rise 38% this year and grow another 19% next year. But those estimates were likely set before China's regulators cracked down on the company. DiDi also hasn't posted its second- or third-quarter earnings reports yet -- so it's impossible to tell how badly the government crackdown actually hurt its business.

How did the Chinese government cripple DiDi?

In early July, the Cyberspace Administration of China (CAC) suspended all new user registrations for DiDi's app in China as part of a vague "cybersecurity review". The CAC then ordered the removal of DiDi's 25 apps from all of China's mobile app stores.

DiDi said the suspension and app removals were related to a "problem of collecting personal information" that violated the CAC's rules.

Some analysts speculated that the CAC targeted DiDi to discourage other Chinese tech companies from listing their shares on U.S. exchanges. A recent Bloomberg report, which claims the CAC is pressuring DiDi to delist its shares from the NYSE over security concerns, seems to support that view.

In late October, the Wall Street Journal claimed DiDi was considering a secondary listing in Hong Kong. That move could convince the CAC to lift its restrictions against DiDi, but it could also enable it to delist its U.S. shares -- which would cut U.S. investors out of the loop before its business recovers.

Therefore, even if DiDi relaunches its app in China, it could turn unprofitable again as it increases its operating expenses to comply with the government's new demands. DiDi has also reportedly set aside 10 billion yuan ($1.6 billion) in anticipation of a big antitrust fine, which would further crush its earnings.

However, the government's crackdown on DiDi has cut it off from gaining any new users over the past five months. It's also made it easier for DiDi's smaller competitors -- which include Meituan's ride-hailing app and T3, a newer platform backed by Alibaba and Tencent (OTC:TCEHY) -- to gain ground.

That might have been the Chinese government's plan all along: to temporarily throttle DiDi's growth and give its competitors a chance to catch up. By the time DiDi's apps return to China's app stores, many of its drivers and passengers will have likely strayed to other platforms.

DiDi's stock looks cheap -- but it could get a lot cheaper

DiDi's stock looks cheap, but it's trading nearly 50% below its IPO price for obvious reasons. It could briefly rally if it relaunches its apps in China, but that euphoria will quickly fade as investors focus on its market share losses, rising expenses, new restrictions, and a potential delisting instead.

Simply put, investors shouldn't buy DiDi's beaten-down stock. I frankly wouldn't be surprised if it becomes a penny stock or gets delisted in the near future.