Shiba Inu (CRYPTO:SHIB), along with a range of other meme tokens and the broader cryptocurrency market, is down again. Shiba Inu's decline as of 3 p.m. ET stood at 4.4%.

However, other meme tokens that have taken on the likeness of Shiba Inu, seemingly with the intent of riding Shiba Inu's parabolic trajectory, have done just that in recent days. The latest meme token that's making some impressive moves is Euro Shiba Inu (CRYPTO:ESHIB). 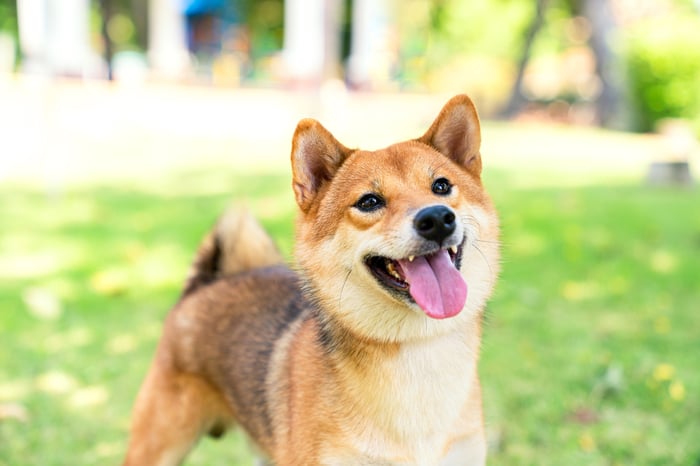 It's important to remember that Shiba Inu got its start as essentially a copycat of Dogecoin's (CRYPTO:DOGE) success. Because it's a meme token, there's no real utility to Shiba Inu's network, other than a community-building effect (which has been impressive, to say the least).

Sure, there's the ShibaSwap decentralized exchange, and a few other potential projects (see: the metaverse) that are grabbing investors' attention with this meme token. However, most would agree that the true driver of Shiba Inu's valuation increase has been speculative hysteria disguised as a strong community.

Thus, Shiba Inu, Dogecoin, or any other dog-inspired meme token should be handled with care. These are the sorts of speculative investments that look really attractive on the upside, but equally depressing on the downside.

Euro Shiba Inu is among the micro-cap tokens many investors may not have heard of. That's because this is a token with a market capitalization that currently sits at around $5 million.

However, for speculators looking for lottery ticket-like returns in this market, such tokens may continue to do well. Despite the recent risk-off sentiment in the market, there appears to be a significant number of individuals willing to throw funny money at speculative assets with the potential to go parabolic.

That said, for every success story out there, there's a dozen or more failures. Whether Shiba Inu copycats can indeed grab the speculative hysteria to shoot to the moon like Dogecoin or Shiba Inu is the key question with these digital currencies.

Indeed, Euro Shiba Inu's recent price action has been entertaining to watch from the sidelines. Investors may want to get their popcorn out -- the craziness may not be over.