Shares of Arrival (NASDAQ:ARVL) ended November down 43.2% from where they started the month, according to data from S&P Global Market Intelligence, as the electrical vehicle (EV) start-up issued a disappointing earnings report that also warned there would be further delays for when an actual EV would roll off the assembly line.

It followed up with an announcement that it would be diluting shareholders with a secondary stock offering of 25 million shares (with a total of as much as 28.7 million if the underwriters want in) in a bid to raise around $330 million in cash as well as issuing convertible notes worth an additional $200 million. 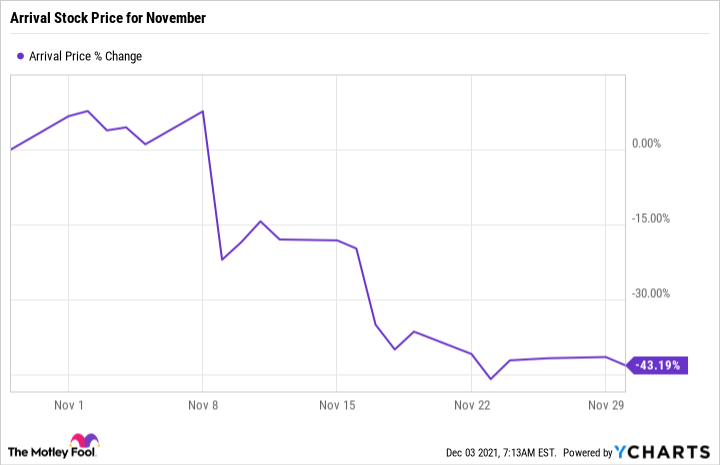 Going public via special purpose acquisition companies (SPACs) still generates a lot of interest from investors, but that doesn't mean all the companies taking advantage of the reverse merger process are ready for prime-time investment.

A Bloomberg analysis last month of 190 SPACs that have gone public since 2019 found they've underperformed more-traditional initial public offerings (IPO). That's not surprising, really, since SPACs are vetted far less rigorously than IPO stocks, which need to validate the backing they receive.

Arrival came on the scene with a lot of promise, but investors might have wanted to scrutinize it a little more closely. For example, it contends its microfactories will allow it to quickly establish production at lower cost, while more efficiently scaling up to meet local market needs. It sounds good in theory, but in practice that hasn't been borne out.

Arrival updated its microfactory rollout schedule and now says it "expects significantly lower vehicle volumes and revenue in 2022" because it needs access to more financing. Since future growth is highly dependent on building out more microfactories, it's going to need money, which may be difficult, so investors shouldn't rely upon its previous long-term forecasts.

It sounds like Arrival shareholders ought to expect serious additional dilution. The secondary offering it just made, along with the convertible notes issuance, is probably just the tip of the iceberg, especially if building out microfactories and rolling vehicles out the door will be delayed.

Any revenue it does generate next year will at best be tilted toward the fourth quarter, but that in itself is dependent upon Arrival's EVs getting certified. It maintains the microfactories will be able to produce 10,000 vehicles a year on just two shifts, but investors will likely be happy if Arrival can produce a single one right now.