Shares of Beyond Meat (NASDAQ:BYND) were sliding today as bearish momentum continued to build against the stock. There was no company-specific news out on Beyond Meat today, but yesterday, Financial Times noted that it had become one of the most shorted stocks on the U.S. stock market.

As a result, the stock closed down 6%. 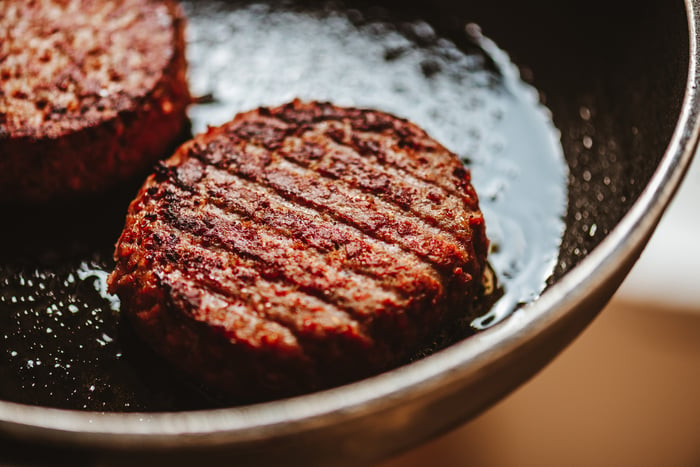 According to Financial Times, 42% of the Beyond Meat float is now sold short, higher than any other Russell 1000 stock, meaning a significant percentage of investors are betting on the stock to fall.

Financial Times went on to say that investors had become concerned after the company said in October that third-quarter revenue would be short of its guidance at just $106 million compared to the previous range of $120 million to $140 million. Famed short seller Jim Chanos has also lined up a bearish bet against the stock, saying that the plant-based meat maker is no longer a growth company.

Indeed, Chanos's critique seems justified as Beyond Meat's revenue growth slowed to just 13% in its most recent quarter, and revenue was actually down in the U.S. where a majority of its sales come from.

Management offered a number of reasons for slowing revenue growth, including the delta variant and labor shortages, but it also appears that there's an element of faddishness to plant-based meat. When sales were spiking just a couple of years ago, a number of customers may have tried the product once or twice but did not become regular customers.

Additionally, the space is also competitive, and Beyond Meat's leadership isn't assured. For example, Chipotle just launched its own plant-based chorizo, but it developed the product in-house rather than sourcing it from one of the big plant-based meat companies. Additionally, rival Impossible Foods is planning its initial public offering (IPO).

At this point, it's understandable why shorts are lining up against the stock. The company has some work to do to rebuild the growth story.