Please ensure Javascript is enabled for purposes of website accessibility
Log In Help Join The Motley Fool
Free Article Join Over 1 Million Premium Members And Get More In-Depth Stock Guidance and Research
By Jennifer Saibil - May 24, 2022 at 5:50AM

The market plunged on these retailers' reports, sending Costco stock down along with it.

Retail giants Target (TGT -0.54%) and Walmart (WMT 0.32%) released first-quarter earnings last week, and what their investors saw in the reports led the markets into a further nosedive. The Dow Jones Industrial Average is now down about 12.2% year to date, and the S&P 500 is down about 16.7%. Target stock has plummeted about 28.5% since its report after trading roughly flat for the year, and Walmart stock is down 17.5% since its report, erasing what had been a positive 2022 for the stock.

Disillusioned investors are letting the disappointing results influence their view of Costco Wholesale (COST -0.54%), sending its stock price down about 13% last week as well. But while Target and Walmart's earnings updates may be a sign of what's going on in the general economy, Costco's results seem to reflect a slightly different story. 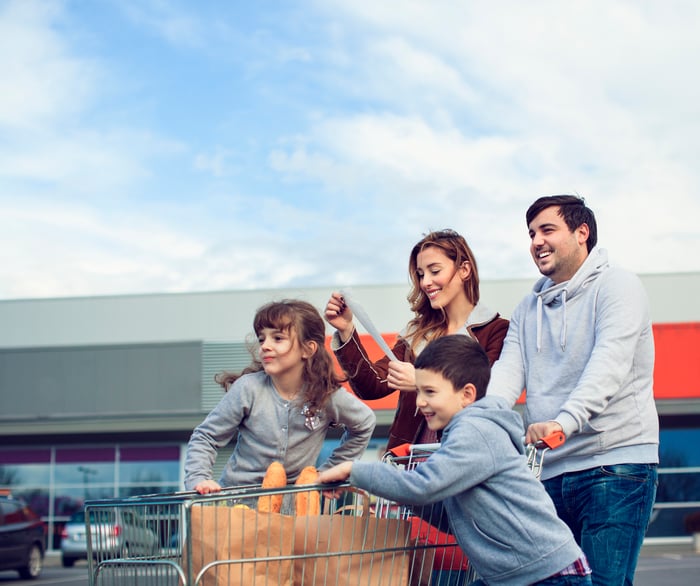 The first thing to note about Costco is that it is one of few public companies that report monthly sales updates. So investors already have a clue about how Costco is managing the same inflation, supply chain problems, and other macroeconomic factors as the rest of the retail sector. As CFO Richard Galanti said on the fiscal 2022 second-quarter (ended Feb. 13) earnings call, "Factors pressuring supply chains and inflation include port delays, container shortages, COVID disruptions, shortages of various components and raw materials and ingredients and supplies, labor cost pressures, of course, as well as truck and driver shortages."

Costco's March sales, covering the five weeks ended April 3, increased an incredible 19% year over year -- an acceleration from the second quarter. April sales, covering the four weeks ended May 1, increased 14%. That leaves May sales. Even with a big slowdown at the end of the quarter, sales growth is likely to be elevated year over year. And if the other large retailers are any indication, growth is likely to be strong in May. Target CEO Brian Cornell said that compared with pre-pandemic levels, the most recent weeks were healthier than the beginning of the quarter.

While these are good numbers to have on hand while the market perhaps undeservedly tanks Costco stock, they don't tell us anything about profitability, which may be just as pressured as Costco's rivals'. But there are reasons to be positive about that news, too.

Costco does have a few tricks up its sleeve that enables it to perform well under challenging circumstances. One is its membership model. Membership fees make up a significant number, reaching nearly $1 billion in the second quarter. That was 10% higher year over year, and renewal rates continued to increase, standing at 92% in the second quarter.

Plus, having a membership compels shoppers to make use of it and spend their money there. Finally, and most importantly, having the revenue in pocket allows Costco to offer the best prices for its customers, taking in razor-thin margins and banking on volume.

This means a few things. First of all, when there's inflation and prices are rising, shoppers are more likely to shop at Costco and get the best price they can. Next, while management is careful about how it passes down price increases, it has increased prices in certain areas. Those increases lead to higher sales, as well as better margins.

What could be a problem in the third quarter is larger and more expensive items, which customers typically hold off on purchasing when prices soar. These bigger-ticket items were part of the problem for Target in its first quarter.

Costco stock became somewhat highly valued (some might even say overvalued) recently, and it was due for some correction. It's now trading down 24.6% year to date, and shares trade at 34.5 times trailing-12-month earnings, down from near 50 just a month ago. For those who have been waiting for a better valuation before taking a position, here you have it. Costco reports fiscal third-quarter earnings on Thursday, and if it reflects better performance than its peers, its share price could jump quickly.