Welcome to "Stock Smackdown," where two of your favorite stocks go head-to-head in a battle for superiority. They'll each be judged on a series of objective merits, including valuation, earnings quality, price appreciation, and dividend quality. We'll also take a look ahead at some more subjective measures. Wall Street's analysts will get their say, but so will The Motley Fool's top market minds.

The winner will be the stock that racks up the most points at the end of their competition. Let's go ringside and meet our two combatants, McDonald's and Coca-Cola .

In this corner …
McDonald's trails only privately held Subway and diversified fast-food franchiser Yum! Brands in locations, but it outdoes both in total sales. That dominance, driven by Mickey D's strong international growth, has made the company one of the restaurant sector's strongest performers for years. It's more than doubled Coca-Cola's gains in the past two decades: 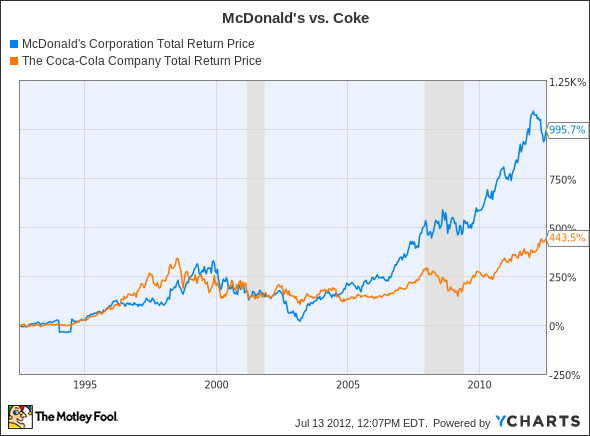 Coke's no slouch, either. The world's most popular soft-drink maker is sold throughout the world, with 94% of the population of more than 200 countries recognizing the iconic red-and-white script. Coke controls the top brand in the world, according to Interbrand, and commands 43% of the carbonated-beverage market to PepsiCo's 31%.

McDonald's and Coke aren't rivals. Their long-standing relationship has been good for both companies, and it's been great for shareholders as well. But in this battle, there can be only one winner. Let's get started.

Valuation battle
We use many different numbers and ratios when talking about the value of a stock. The price-to-earnings ratio is the standard, so we'll check each company's current P/E and five-year historical average P/E. We'll also use price to free cash flow today. Earnings can be gamed with a number of different accounting tricks, but free cash flow is harder to manipulate, making it a favored metric here at the Fool.

In each case, the difference between a stock's current ratio and its five-year average ratio will be more important than the numbers themselves. Stocks trading significantly lower than their average ratios may have more room to return to that middle ground. Stocks trading significantly higher than their averages may be more at risk of lower future gains.

For the tiebreaker, we'll check one less-used financial metric: the debt-to-equity ratio. A company with little or no debt is usually in better shape than one leveraged to its eyeballs.

It looks like McDonald's takes this round. How will it fare in the next? Let's find out.

Earnings-quality battle
A company can be cheaply valued without being a good value. To balance out our valuation fight, let's look at a few key earnings statistics for each company. We'll look at gross and net margins, a five-year annualized rate of earnings growth, and consecutive years of both positive earnings and earnings growth since 1992, two decades ago. A company with no momentum today is less likely to become a superstar later -- it has happened before, but not often.

It isn't even close, as McDonald's takes the earnings=quality crown! Can it hold off Coke in the dividend battle ahead?

Dividend battle
A growing company is great, but one that pays you back is even better. Since both companies are paying dividends today, let's see how strong and stable they really are. We'll examine yield, the earnings and free cash flow payout ratios, the five-year annualized dividend growth rate, and each company's current streak of uninterrupted payments.

Those payout ratios are important, particularly the free cash flow payout ratio. Companies that pay out more than they take in can rarely sustain such practices for long.

Coke comes from behind to become the dividend champion, thanks to an amazing streak of uninterrupted payments, and more sustainable payout and free cash flow payout ratios. Can it survive the final rounds?

Battle for the investors
Looking at the past is well and good, but let's go further. How do the world's most engaged market participants view these companies? Let's see what Wall Street's analysts expect from these companies, and what our Motley Fool CAPS community thinks.

The fourth round ends in an unexpected tie, because of each company's identical CAPS ratings. The tiebreaker, then, will come down to CAPS All-Stars. Coke earns a 96.9% positive rating to Mickey D's 96.7%, breaking the tie by the slimmest of margins and advancing to tie the overall competition at two victories apiece.

Battle for the future
Healthy headwinds face both companies in the future. Obamacare's initiatives could hinder growth for both companies in the United States. I don't think it's a major threat to either company domestically, though, and each will rely on international expansion in years to come. Draconian measures from Chinese autocrats could threaten either company's efforts there, but that's a black swan event whose possibility seems very remote.

Higher-quality burger joints with moderately higher prices are luring customers away from Mickey D's domestically, much as Chipotle has been taking sales from Yum!'s Taco Bell. McDonald's faces fewer international threats and has much greater room for expansion. Arcos Dorados , its Latin American franchisee, operates just over 1,800 restaurants on a continent with 500 million people, compared with more than 14,000 American Mickey D's for fewer people. There are also only 1,400 Chinese locations, so there's clearly great room for expansion there.

It stands to reason that Coke will benefit from Mickey D's expansion as much as the Golden Arches itself. Coke has its own McDonald's division, ensuring placement in each new location. Coke has no serious competition to its flagship products, and it's so large that it can (and often will) simply buy out any fast-growing upstart.

Recent rumors that the beverage giant might buy energy-drink kingpin Monster Beverage sent Monster's shares soaring. Coke has enough cash on hand today to simply buy Monster outright. A 50% premium would be worth about a year's worth of Coke's cash flow. McDonald's, which somewhat foolishly let go of Chipotle years ago, has much less cash to go after its former hot property, and it generates less free cash flow to cover major buyouts.

It looks like Coke pulls out a victory in the end. Both companies are great long-term investments, but Coke's territory looks a bit more defensible -- and its ability to piggyback on Mickey D's growth gives it an edge as well. Do you agree or disagree? Let me know with a comment!

Interested in learning more about what makes these companies so strong overseas? The Motley Fool's put together a free report highlighting McDonald's and Yum! Brands' international growth, and what drives that expansion. There's a third great internationally focused stock included in this free report, so find out everything you need to give your portfolio a global edge.