The home-improvement retailer has gotten through tough times while still paying shareholders well.

Investors have always been interested in stocks that pay dividends, but lately, low interest rates on bonds and other fixed-income investments have made solid dividend payers even more valuable. Among the most promising dividend stocks in the market is Lowe's (LOW -0.88%), and one big reason is that it's one of the few exclusive companies to make the list of Dividend Aristocrats. In order to become a member of this elite group, a company must have raised its dividend payouts to shareholders every single year for at least a quarter-century. Only a few dozen stocks manage to make the cut, and those that do tend to stay there for a long time.

Lowe's is one of the big two names in home improvement retail but, unlike its rival, it struggled for years during the extended slide in home prices. Even when things looked like they were improving in housing, they repeatedly gave way to even worse conditions, especially in certain hard-hit markets. But last year, the housing market finally started to hit bottom and, ever since, Lowe's stock has found a new following among investors. Let's take a closer look at Lowe's to see whether it can sustain its long streak of rewarding dividend payouts to investors.

How Lowe's has put a roof over investors' heads
In the home improvement space, it's impossible to avoid comparisons between Lowe's and rival Home Depot (HD 0.66%). Both companies have impressed investors in recent months, with Home Depot having reported a 14% jump in sales in its most recent quarter, and rewarding shareholders with a whopping 37% dividend increase. That leaves Lowe's with a lot of catching up to do and, for its part, Lowe's earnings were good, but not nearly as strong as Home Depot's -- due, in part, to Lowe's smaller size and less extensive store network. Moreover, Lowe's guidance for 2013 was somewhat disappointing, even in the face of an improving housing market.

The big question for Lowe's, though, is whether it can bolster same-store sales in its existing locations to nearly the extent that Home Depot has. In addition to having to deal with its larger rival, Lowe's also faces the challenge of dealing with smaller niche players in the home-improvement space. Flooring specialist Lumber Liquidators and deck-materials maker Trex aren't threats to take over Lowe's entire business, but they've sought ways to capitalize on particularly lucrative segments and could force Lowe's to rely more heavily on lower-margin goods like appliances. 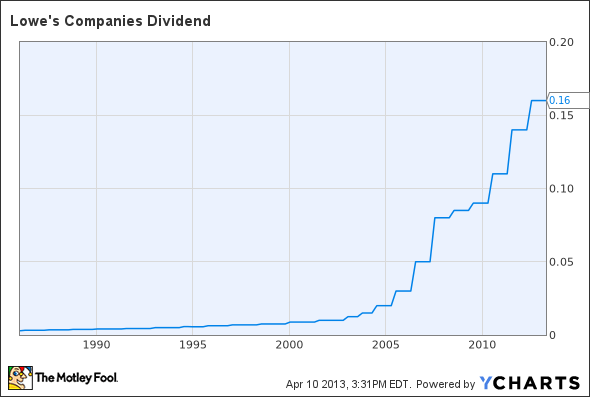 With a relatively low payout ratio, Lowe's has been able to sustain dividend increases even during tough times. What Lowe's faces right now, however, is the need for the latest housing recovery to have staying power. Given the industry's fits and starts in past years, counting on housing to boost Lowe's prospects going forward is far from a sure thing.

When will Lowe's dividends rise again?
With Lowe's having made a habit of raising its payout in the summer, investors can expect another boost in the near future. Because the company has seen such a big share-price jump in the past year, another substantial increase of between $0.02 and $0.04 per share would be welcome news for yield-hungry shareholders, with the higher end of that range allowing the stock to claim a 2% dividend yield.

Click here to add Lowe's to My Watchlist, which can find all of our Foolish analysis on it and all your other stocks.

This Under-the-Radar Investing Strategy Could Make You Richer

2 Dividend Stocks to Avoid (and 1 to Buy)